The helm of raedwald is obtained from completing the fifth, final clue during the Crack the Clue! event. It is part of the clue hunter outfit. This item has the same stat bonuses as an iron full helm.

In order to obtain the helmet, the player must dig between the four iron rocks by the cave entrance east of the Clock Tower while having a spade, a nature rune, a superantipoison with one dose remaining, and a pair of leather boots.

The helm of raedwald was not found until just over a year (377 days) after the fourth clue was made available, alongside several hints given by Jagex Moderators, on 18 July 2017. An additional sentence was added to the examine text with an update the same week to commemorate the first player that found it, Pikachu Yip. 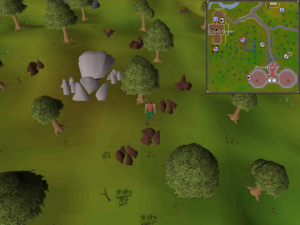 Location of the helm of raedwald.