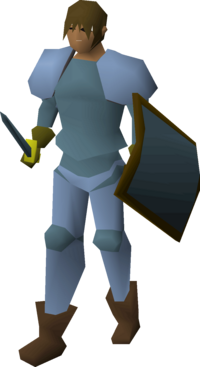 Heroes are NPCs that walk around East Ardougne wearing what appears to be a Rune platebody and platelegs, but different coloured at places. They also have leather gloves, boots and wield a rune longsword and square shield. Heroes can be pickpocketed by players with level 80 or greater Thieving, which gives 273.3 experience plus coins or other items.

They are often present near the marketplace in East Ardougne, or the south east bank. One of them is also near the entrance of the Ardougne Zoo. Heroes attack players when they steal from the Gem stall. They also attack when the player steals from a stall and tries to trade the stall owner. One of them is always near a bakery stall, so the player can easily steal food to heal from failed pickpocketing attempts. Unlike most thievable NPCs, players can be stunned frequently when pickpocketing heroes even at level 99 Thieving. A successful pickpocket attempt usually gains between 200 and 300 coins.

A successful pickpocket attempt will gain one the following items: