The Heroes' Guild is located just south of Burthorpe. The guild is only accessible to members who have completed the Heroes' Quest. It is here that you can buy the dragon mace and dragon battleaxe, as well as recharge your amulets of glory in the fountain. 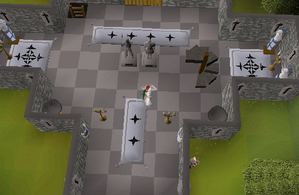 The Heroes' Guild has Taverley to the south and Burthorpe to the north. The fastest way to get there is using the portal at the top of the Myths' Guild after Dragon Slayer II, or with the Teleport to House spell (if your house is in Taverley) or a redirected Taverley teleport tablet. Another option is to use a games necklace or the grouping teleport to the Burthorpe Games Room.

Another way to get there is by teleporting to the Warriors' Guild with a combat bracelet.

The 1st floor[UK]2nd floor[US] has a Prayer altar (dedicated to Saradomin). Helemos's shop, the "Happy Heroes' H'emporium", is here, which sells the dragon battleaxe for 200,000 coins and the dragon mace for 50,000 coins. There are also three ladders that lead up.

The 2nd floor[UK]3rd floor[US] of the Heroes' Guild has a table with six chairs around it and a pair of searchable chests, which will yield trivial items such as pots and broken glass if searched hard enough.

The Heroes' Guild basement is accessed via a ladder on the ground floor[UK]1st floor[US] and is a miniature dungeon. It contains 2 monsters - 5 giant bats, as well as a caged blue dragon that is good for training Ranged, Magic, or even Melee if you have a halberd.

The Heroes' Guild mine is in the basement, too, with several rocks for higher level miners. There are:

These are all arranged along the cavernous walls to the east side of the dungeon.

The Fountain of Heroes is in a small side passage off the dungeon. If you dip an amulet of glory in the fountain, it will be recharged to four teleports.

The fountain used to be located on the ground floor, but when the Burthorpe Games Room was introduced along with its associated teleport via the games necklace, it was moved downstairs to the basement. A shortcut is available to those with 67 Agility and who have completed the hard Falador Diary, which leads directly from the basement entrance to the Fountain of Heroes.