The Hespori is a sporadic boss. In order to fight it, players must first plant a Hespori seed in the Hespori patch within the west wing of the Farming Guild, which requires level 65 Farming to access (boostable) and 60% Hosidius favour. It takes 22-32 hours to grow, depending on when it was planted. When fully grown, the flower behind the cave entrance will sprout open.

According to Arno, the Hespori is a rare carnivorous plant originating from Morytania, becoming conscious and highly aggressive once fully grown. They were also used as a weapon against vampyres by Queen Efaritay[1]. The Hespori's appearance is also extremely similar to that of The Maiden of Sugadinti, and it has been confirmed that there is a link between the two.[2] This link is confirmed in the quest A Night at the Theatre, in which it is revealed that the Maiden was created using Hespori bark, which possesses regenerative properties.[3][4]

Killing the Hespori allows it to be harvested, which grants 12,600 (12,915 with full Farmer's outfit) Farming experience, as well as seeds, including the rare white lily and anima seeds, along with the bottomless compost bucket.

Casting Resurrect Crops on Hespori after the fight yields no Farming experience or loot. Casting the spell results in the message "Your Spell fails and the patch is cleared." 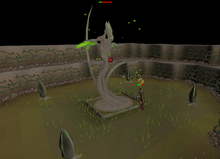 A player battles the Hespori. 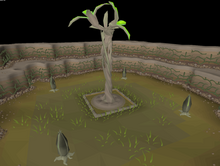 Four flower buds surround the Hespori. They open up three times during the fight: once at the start, again after the Hespori goes below 66% of its health, and another final time after it goes below 33% of its health. They all have 10 hitpoints, but will always die in one hit from any weapon. The Hespori is immune to damage while any flowers are open, and it will continue to attack while they are open.

Hespori has low slash Defence, making slash weapons the best option. At least level 60 melee stats, a dragon scimitar, and high Ranged defence or Strength bonus equipment is recommended. A special attack weapon such as a dragon dagger can be used to quickly deal damage.

Bring high healing food, antipoison, melee stat boosts, and optionally a Ranged weapon, such as darts or a charged blowpipe to quickly kill Hespori's flowers. A Prayer potion may be be required if the fight lasts too long.

A hespori seed, spade and seed dibber are required to plant a new Hespori after the previous Hespori has been defeated and dug up.

Before waking up the Hespori, boost, get poison immunity and equip a Ranged weapon. With high Ranged Defence armour, turn on Protect from Magic, otherwise use Protect from Missiles if using higher Magic Defence armour. Also use melee stat boosting Prayers if available.

Wake up the Hespori, and attack the first round of flowers with Ranged. Swap to a special attack weapon and use the special attacks on Hespori. Switch back to the main slash weapon if the next round of flowers were not activated. Kill the flowers with ranged. If the fight lasts longer than 50 seconds, the player will be rooted in place and must escape the vines by clicking away many times. Attack the Hespori until the flowers are active again. Switch to Ranged and kill them again. Finish off Hespori.

Clear the Hespori patch to receive its drops.

Drop rates estimated based on 60,326 samples from the Drop Rate Project, unless otherwise cited.

The average Hespori kill is worth 27,313.78. The player will have one roll on each of the two drop tables: anima seeds and normal seeds. The normal seed table also contains the bottomless compost bucket, which can hold up to 10,000 compost of any kind. In addition, Hespori has a chance to give the Tangleroot pet as a tertiary drop.