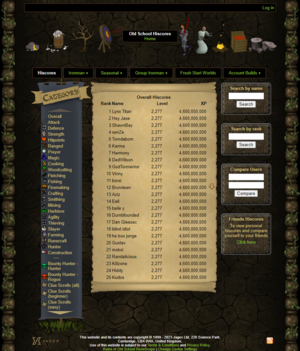 The HiScores is a feature of the Old School RuneScape website which ranks players by their experience in skills, score in Bounty Hunter and Last Man Standing, treasure trail completions, and kill counts at bosses and raids. Unlike the RuneScape HiScores, there are no requirements to be shown on the HiScores other than being ranked in the top 2,000,000 players in a category.

The board can also be separated into the different game modes, this includes the standard HiScores, Ironman mode, Ultimate Ironman mode, Hardcore Ironman, and Tournament Hiscores. When a seasonal game mode is active, such as Deadman Mode or Leagues, they also have separate hiscores.

The Old School RuneScape HiScores can be found on the official website here.

To be featured in the Boss Killcount highscores, you will currently need to kill a boss or complete an activity at least 50 times. This is true for all bosses and Boss Killcount activities, except for Bryophyta, Chambers of Xeric: Challenge Mode, Hespori, Obor, Skotizo, The Corrupted Gauntlet and TzTok-Jad, which all require just 10 'kills' to be featured, and The Mimic and TzKal-Zuk, which just require 2 kills to be featured.