The High Priest of Icthlarin is the head priest of the Church of Icthlarin and can be found in the Great Temple in the west of the city of Sophanem. He is in charge of the city[1] as well as its religious leader; his duties involve the worship of the god of the dead as well as ensuring that the Devourer wields no power in Sophanem.[2] He is a friendlier man than was his predecessor as High Priest, the 'cruel and hard' Klenter, who 'could hold a grudge forever.'[3]

The High Priest plays a fairly large role in the Icthlarin's Little Helper and Contact! quests. 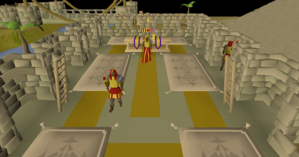 Following the death of Klenter, he succeeded him as the High Priest of Icthlarin. Within a week, the city was stricken with disaster as a plague broke out affecting both the people and animals, causing many Sophanites to seek refuge in neighbouring Menaphos.[4] Moreover, there was an influx of giant locusts eating the crops as well as diseased frogs from the River Elid.[5] He and his clergy then decided to quarantine Sophanem in order to contain the plague, allowing nobody in or out.[6] The rule was subsequently strictly enforced by the doormen of the city. Moreover, Menaphos was also locked down in a similar manner.[7][8]

At the same time, Amascut the Devourer commenced a plot to claim the soul of Klenter for herself by hypnotising a hapless adventurer in order to to her bidding. She showed the adventurer a secret way into the city, where they used their cat to enter the High Priests' Pyramid and steal a canopic jar containing Klenter's organs, much to the anger of the priests and the dismayed ghost of Klenter himself, as well as placing her symbol in the burial chamber so that she could enter herself. As the adventurer was about to exit the pyramid and bring the jar to the Devourer, Icthlarin himself appeared, freeing the adventurer from their hypnosis and raising the ghost of Klenter to protect his soul.

The adventurer, now free of their hypnosis, suffered acute memory loss upon exiting the pyramid. They were advised by the Sphinx to seek out the High Priest's help. Though initially dismissing the graverobbing adventurer thought to be the cause of the plagues, the High Priest became less hostile towards them when presented with the sphinx's token and instructed them to replace the burial jar in the pyramid. He added that the remaining townsfolk were starting to doubt his leadership abilities and bade the adventurer not to tarry.[9] The jar was successfully returned, yet the plagues did not disappear completely. In particular, the spots afflicting people's bodies and the diseased livestock and frogs remained. At this point, the High Priest started panicking but pulled himself together upon being reminded of his duties. He suggested that the plagues remained because the burial ceremony for Klenter had not yet been completed, with the ghost unable to pass on to the afterlife. He asked the adventurer to help the carpenter and embalmer with their duties while he himself made the last preparations for the ritual, promising the adventurer a reward for the help. The adventurer helped the two men, whose demeanour had become less hostile now that the newcomer was working with the High Priest. 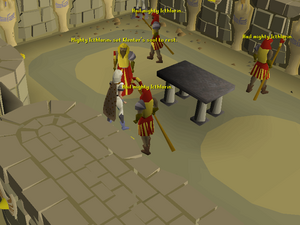 As the ritual to lay Klenter's soul to rest inside the pyramid was underway, however, the adventurer suddenly remembered their actions whilst hypnotised and tried to warn the clergy of the Devourer's imminent arrival. It was too late, for the goddess appeared thanks to the symbol that had been placed in the chamber. The belligerent High Priest vowed to stop Amascut at all costs, upon which she ordered the adventurer to kill the priests so that she could devour Klenter's soul. As they were no longer subject to her influence, she possessed a hapless priest instead and disappeared, but he was killed by the adventurer.

The plagues remained, from which the High Priest concluded that the Devourer must have hypnotised yet another adventurer to steal a burial jar, such that another ceremony would have to be performed. He feared the process would have to be repeated until either they or the Devourer would give up. He rewarded the adventurer with an amulet of catspeak and told him their role in the matter was over. Indeed, the battle for Klenter's soul continues still.[10] 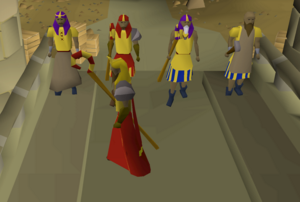 During these events, the adventurer proved that the plagues are not actually contagious, having suffered no effect from them himself despite prolonged stay in the city. The Sophanite quarantine was therefore lifted, but now Menaphos kept enforcing its own quarantine upon the Sophanites. The High Priest led a delegation of Sophanites across the bridge to the barricaded gates of Menaphos, where he was rudely rebuffed by the ruthless chief gatekeeper Coenus and his Menaphite guards, who went so far as to attack the High Priest and his men. He had people keep an eye on the bridge, only to find out it is guarded day and night, making passage impossible. He therefore enlisted the aid of the adventurer from before to lift the Menaphite quarantine, for, whilst Sophanem itself was again open to the outside world, the citizens that had fled to Menaphos were now trapped there, unable to return and unaware of the fact that Sophanem was safe.

The adventurer suggested seeking an underground way into Menaphos, which reminded the High Priest of the Sect of Scabaras. He recounted the story of Tumeken's Dream from the Book of Light and Day and redirected him to the Temple of the Lesser Gods, which contained a shrine to Scabaras, and its custodian Jex. The adventurer obliged and discovered that Scabarites had recently broken into the temple from some kind of dark dungeon below, wrecking it and its bank. They made it to the end of the dangerous, Scabarite-infested tunnels, where they found the corpse of a man named Kaleef and met a woman called Maisa at the other end of a gaping chasm. Both turned out to be agents of Osman, the spymaster of Al Kharid. The adventurer struck a deal with Maisa; he would bring Osman to the cave so that he could get her out of the quarantined Menaphos, and she would inform the Sophanites in the city that they could safely return home.

The agreement was carried out successfully, although Osman and the adventurer had to fight off a giant scarab and several Scabarites that had slain Kaleef. Maisa kept her word, allowing the Sophanites to return home, and a trade link was established between Sophanem and Al Kharid, much to Osman's liking, for the arrangement would drive a wedge between Sophanem and its neighbour Menaphos, with whom Al Kharid had long had hostilities. Grateful for the return of his people, the High Priest once more rewarded the adventurer for his help, but noted that he still wished for Menaphos's quarantine to be lifted, despite the new trading relations.[11] Since the return of the people, the High Priest has garnered more respect from his citizens and therefore more self-confidence.[12]