Horror from the Deep

From Old School RuneScape Wiki
Jump to navigation Jump to search
The RuneScape Wiki also has an article on: rsw:Horror from the Deep

Horror from the Deep is an experienced quest revolving around the mysterious disappearance of Jossik, keeper of the Lighthouse near the Fremennik Province. As the title suggests, the investigations lead to the discovery of very dangerous creatures living beneath the lighthouse.

A damsel in distress[edit | edit source]

Start by speaking to Larrissa outside of the lighthouse, north of Barbarian Outpost. A fairy ring is located right next to the lighthouse (fairy ring code ALP). Her boyfriend, the lighthouse keeper, has disappeared and left the lighthouse locked whilst the lights are out. She is worried about him and explains that she has been cut off from the mainland Fremennik Province by a storm that destroyed the bridge to the east. She asks you to find her cousin, who has a spare key to the lighthouse, and to repair the bridge so she can tell her family what is going on. Agree to help her and ask what she wants.

Larrissa explains that her cousin, Gunnjorn, left their home in Rellekka to pursue his interest in practising Agility. Head to the Barbarian Outpost, for example using a Games necklace or the Grouping interface. Alternatively, go down south of her jumping across the basalt platforms and into the Barbarian Outpost. If planning on using the basalt rocks, bring food as it has a high failure rate even with decent agility.

Use both planks on the broken bridge some distance to the east of Larrissa (you will cross another bridge to get there). For each side of the broken bridge (east and west) you will need to use a plank (only regular planks work) and 30 steel nails with a hammer in your inventory. Note that you can cross the bridge before completely fixing it by jumping. Also, the bridge will not look any different after fixing it. Check your quest log to make sure it says that you've fixed the bridge.

Voices in the night[edit | edit source]

Return to Larrissa. She asks you to go inside the lighthouse and find out what happened to Jossik. Enter the building; you will appear in an instance with Larrissa inside. The furniture is smashed and there are blood splatters and claw marks on the floor and walls. She asks you to repair the light mechanism to prevent any shipwrecks. She does not know how to, but says Jossik probably had some manuals lying around. Go up one floor. You may wish to search the bookcase and take all the books to find out what is going on.

The journal of Jossik chronicles how he became lighthouse keeper when his uncle Silas mysteriously disappeared and that he began hearing strange voices. It also mentions the local Fremennik's superstition that there are sea monsters beneath the lighthouse and the strange metal door his uncle had installed in the basement. After meeting Larrissa, Jossik found Silas's 'bizarre' diary and put it in the bookcase as well. The voices and sounds he had heard became more disturbing over time and he eventually decided to give Larrissa a spare key. The diary ends with Jossik's decision to investigate strange noises from the basement. The uncle's diary reveals some passages about creatures called dagannoth and joining them and the ocean. In particular, it mentions the metal door several times as being 'the key'. In between the incoherent ramblings, it says that the key to the door is given by colours: white, blue, brown and red are the elemental runes. Similarly, yellow and green are weapons: the sword of the warrior and the arrow of the huntsman, respectively. The door is meant to bind the dagannoth to the lighthouse and Silas ends with the suggestion that either of them can become the other. 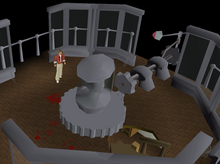 The lighthouse manual describes how to maintain the Lightomatic Deluxe 500. There is a troubleshooting FAQ section at the end of the book. If there is no light, you should use a tinderbox to light the Light Source Module producing the flame. If that does not work, the fuel may be the problem, in which case the book recommends official Lightomatic Non Renewing Light Source Fuel, though swamp tar can work. If the light is on but barely visible, you may need to remove the dark shipping wrapping from the Light Amplyfying Lens System (LALS) or use the official LALS Maintenance Pack to fix any cracks, though some molten glass will also work.

Go up to the top floor and use some molten glass and some swamp tar in either order on the lighting mechanism in order to fix it. Then, light the tar with a tinderbox. The Lightomatic will be fixed. Return to Larrissa, who requests that you do everything to find Jossik.

The door is the key[edit | edit source] 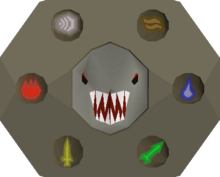 Go down the iron ladder into the basement to find the door mentioned in Jossik's journal. You appear in a kind of sea cavern, with further passage blocked by the metal door. It has a monstrous face in its centre surrounded by six icons: the four runes, a sword and an arrow.

A fight is imminent; if you need to bank, use your games necklace/Grouping teleport to go back to Barbarian Assault, or use the fairy ring back to Zanaris to bank. Get good armour (rune or better for melee) or magic armour (Mystic robes or better); bring many mind, chaos, death, or blood runes and enough runes to cast several of each elemental spell (wind, water, earth, and fire); get a good weapon for melee and some ranged equipment.

Horrors from the deep[edit | edit source]

Go through the eastern part of the door and down the ladder. You are in a spacious cavern with Jossik, injured, sitting by the ladder. Talk to him and be prepared to fight a dagannoth. Note: These battles are not safe; if you die, your items will be lost as normal. 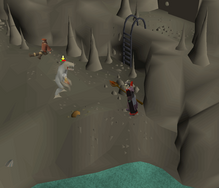 Jossik says his leg is broken and 'those creatures' can come back any moment. He explains he was attacked by mysterious monsters whilst investigating what had happened to his uncle Silas, when suddenly he was attacked by very strong monsters who trapped him there. You suggest going back to inform Larrissa that he is safe, at which point a level 100 dagannoth emerges from the sea and attacks!

The dagannoth only attacks with melee, so Protect from Melee is recommended, otherwise it is possible to safespot from behind the rocks in the room. It can be killed by all forms of combat.

After defeating it, Jossik says that was not the creature that had attacked him but one of its offspring. A cutscene follows in which a larger dagannoth appears from the waters, revealing itself to be the much stronger dagannoth mother. She attacks with both Ranged and melee, periodically changes colour in cyclical fashion. You have to attack her with the correct style depending on her colour in order to deal any damage. 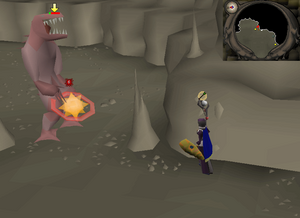 A safespot for fighting the dagannoth mother. Protect from Missiles should be active at all times during the fight.

If you cannot see the colour changes clearly, look at the chat box. Using the wrong attack does no damage to it. She detects Prayers and will automatically use the opposite attack type. By default, she will use Range at a distance and melee up close, her melee attacks are stronger.

She has higher defensive melee stats, so it is easier to ignore her melee form and either only use Magic, or switch between that and Ranged. Any type of air staff can help switch between the correct spell types.

The stalagmites in the room can be used to safespot. Wait for the desired colour while taking no damage, attack from a distance with Protect from Missiles active, or flinch with a melee weapon. Alternatively, climb the ladder until she changes to the right colour.

When closing the reward scroll interface, you tell Jossik to get out of the cave. He agrees you must go quickly for the mother's children are coming. He also tells you to follow him upstairs to open the familiar-looking casket. 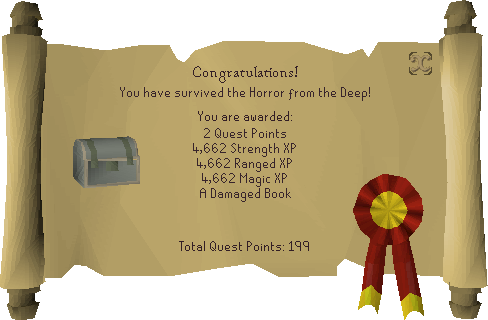 Completion of Horror from the Deep is required for the following: