From Old School RuneScape Wiki
Jump to navigation Jump to search
This article is about Hosidius. For other uses, see Hosidius (disambiguation).

Hosidius is one of the five cities in the Kingdom of Great Kourend. Led by Lord Kandur Hosidius of the Hosidius House, their main export focus is on Farming/agriculture and Cooking, and are the primary supplier of food to the citizens of the Kingdom as well as the soldiers of the Shayzien Army. Most people in Hosidius worship Saradomin, though a few also worship Zamorak, although as with other human settlements, they are looked down upon.

Because of the high demand of food in Great Kourend, Hosidius requires a large amount of land to grow their crops in, and thus possesses the most land out of the five cities - this is because a famine struck the kingdom sometime during 5th BA to 1st BA (1,460 years ago). Five years after the famine began, Lord Ethrain Hosidius I met with the Lords of the other four Houses, coming to an agreement that half of each of the city's lands be granted to Hosidius in order to grow more crops to stop the famine, which was then approved by the ruling Council of Elders.

Like Shayzien, Hosidius is one of the more recent cities founded in the history of Great Kourend - the founder is unknown, but it was created by refugees escaping the Dragonkin Conflicts.

Earning Hosidius favour can be done by helping with the production of farmed foods and preparing food for soldiers. Once you have earned Hosidius favour, you will gain access to both the city kitchens, which reduces the chance of burning food when cooking using their ranges by 5%, access to a new Spirit tree patch, access to the Woodcutting Guild and Farming Guild, and the ability to play the Tithe Farm minigame, which focuses on gaining Farming experience.

To progress in the Architectural Alliance miniquest, players must gain 100% Hosidius favour and speak to Hosa by the statue in the Kourend Castle courtyard.

The amount of earned favour can be checked under the quest tab, then select the purple icon within this quest tab. 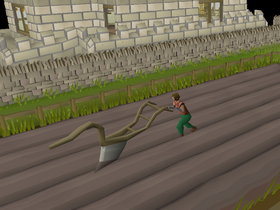 At 0% favour, players can only plough the fields found south of the town square. Players will need to push the plough back and forth to till the soil. Favour is granted randomly while performing this activity.

Players will automatically keep pushing the plough until they reach the edge of the field (pushing the plow from the other side will change its direction), or until the plough breaks, in which case they will need to use a hammer to repair it (there is one on the ground just south of the field), granting 10 Crafting experience. Ploughing fields will also randomly grant 10 Farming experience every so often.

It is not necessary to switch fields or move the plough beyond pushing it back and forth; the same amount of favour will be given regardless of location.

Ploughs are found in the south-east of Hosidius, north-west of the Tithe farm, south-west of the Vinery. A quick way to reach them is to use the Skills necklace teleport to the Woodcutting Guild, and walk east, across the saltpetre area, and walk north-east when reaching the Altar.

At 5% favour, players can make sulphurous fertiliser. Each bucket made grants 2 Farming experience to the player.

The fertilizer is made from saltpetre and regular compost. Manually combining them is faster than the AFK method. Saltpetre can be traded with other players, or can be found in the area east of the Woodcutting Guild, and will spawn in one of five possible locations within the area, and moves once the deposit is depleted. A helpful tip is that Konoo, a saltpetre digger, will be located wherever the latest saltpetre deposit is located. A spade is required to gather saltpetre. If players do not have one, Konoo can also provide a spare spade. For faster collecting, use the bank deposit box in the centre of the area.

Saltpetre can also be collected by subduing Wintertodt. This approach may take a lot longer, but if players plan to do Wintertodt anyway, they might consider collecting saltpetre in this way.

After combining the saltpetre with compost, players are to give the fertiliser to the Clerk, located at a building in the middle of the Saltpetre area. In return, players will receive 0.1% favour for every bucket of sulphurous fertiliser given to the Clerk. The Clerk will take all sulphurous fertilisers in the player's possession, including the bank, which means players do not need to make multiple trips to donate, and can gain massive amounts of favour in one go. From 5% favour, it takes 400 buckets of sulphurous fertilisers to reach 45%, 700 to reach 75%, 850 to reach 90% (Allowing for completion of The Depths of Despair to reach 100% favour), or 950 to reach 100%. At current prices, 950 of each costs approximately 38,950 coins. Note that the buy limit for compost is 2000 - players may wish to buy compost packs at a lower rate of 2,000gp from any farming shop. Should a player opt to buy all 950 of the compost needed from a farming shop and buy saltpetre from the Grand Exchange, 100% favour would cost approximately 25,700 coins.

As mentioned above, at 5% favour it is advisable to make sulphurous fertilizer. One of the easiest methods is by visiting Vannah's Farming Stall located in Hosidius. Players may buy compost packs and store them using the Exchange feature with Tool Leprechauns located around Gielinor. From 5% favour you'll need 950 compost for 100% favour. After they're stored, dig saltpetre and use the saltpetre on the compost, which you can pick up from the Tool Leprechaun at the nearby spirit tree patch (for added efficiency hop worlds to find a saltpetre spawn close to the Leprechaun). You may turn in sulphurous fertilizer to the Clerk located near the bank deposit box next to the saltpetre.

The Depths of Despair[edit | edit source]

Once players reach 20% favour, they can start the The Depths of Despair quest. This quest requires completion of Client of Kourend and level 18 Agility. Completion of the quest will grant a Hosidius favour certificate worth 10% favour.

Once players have 45% favour, they are able to cook in the Mess, where they must cook meals for the Shayzien soldiers according to their demands as shown on the screen, using provided ingredients. The soldiers want stew, meat pie, or pineapple pizza. In order to participate in this activity, players must have the appropriate Cooking level to cook the meals: 20 for meat pie, 25 for stew, and 65 for pineapple pizza. Players will gain moderate amounts of Cooking experience and favour once they serve the food on the buffet, based on the demand for the meals the player serves. 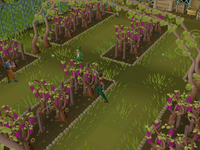 At 65% favour, players will have access to the Vinery, where they can farm grapes after using saltpetre and grape seeds on a vine patch (requires 36 Farming, can be boosted). Players are granted 0.8% favour for each grape seed planted.

Charcoal burners are located on the southern part of Hosidius. Charcoal burners are used to make juniper charcoal. By cutting juniper trees in the area, players can receive juniper logs. These logs can be placed in each furnace (up to 60 each) and turned into charcoal after sixteen hours.

The Clerk's house is located in the south-western part of Hosidius. She accepts sulphurous fertiliser donations and grants favour points for them.

An ancient underground temple found beneath the Forthos Ruin, the dungeon contains monsters ranging from mid to high combat levels, as well as a mid-level boss, Sarachnis. Besides monsters, there are also many other activities for players to engage in.

Players with 35% Hosidius favour have access to the spirit tree patch.

Players with 65% Hosidius favour have access to the Vinery, where they can farm grapes after using saltpetre and grape seeds on a vine patch.

The Mess is located in the north-western-most corner of the Hosidius area. It is full of soldiers, and hosts a minigame in which a player can make stew, meat pie, and pineapple pizza to feed the soldiers. Doing so grants Cooking experience as well as Hosidius favour.

Saltpetre is located south of the main bank in Hosidius. There are five spawn points where players can dig saltpetre, which is used to make Sulphurous fertiliser, and dynamite for the Blast mine in Lovakengj.

The Tithe Farm is located in the south-east corner of Hosidius, with an entrance on the western side. It is a fast-paced minigame that allows players to train the Farming skill through planting, caring for, and harvesting fruit specific to the Tithe Farm. All seeds and fertiliser are provided; players must bring their own watering cans (at least 4 are recommended), as well as a spade and seed dibber.

There are three different kinds of fruit that can be grown: golovanova, bologano, and logavano. Each requires a different Farming level and grants increasing experience for harvesting and depositing the fruit. If done correctly, the Tithe Farm minigame can quickly train Farming at no cost to the player.