From Old School RuneScape Wiki
Jump to: navigation, search
This article is about the Hosidius kitchen. For the building that feeds the Shayzien soldiers, see Mess.
Hosidius Kitchen 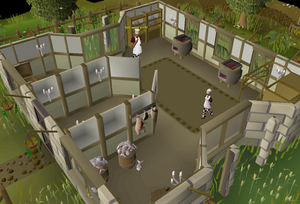 The Hosidius kitchen is a small building located in the Hosidius district just east of the Mess. The building contains a bank chest and two cooking ranges.

The fastest teleportation to the kitchen is by using Kharedst's memoirs to Hosidius (11s); alternatively you can teleport via the Xeric's talisman to Glade then run north west (33s), or to the centre of Kourend and run south east.

The cooking ranges provide a 5% increased chance of successfully cooking food over standard cooking ranges. This is increased to 10% with completion of the elite Kourend & Kebos Diary. Players must have 100% Hosidius favour in order to use the ranges.