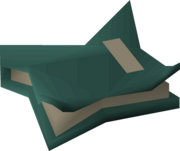 The houndmaster's diary is a book that appears on the ground after defeating the muttadiles in the Chambers of Xeric.

The book details a houndmaster's exploits with the dogs in the Chambers, and the experiments that he and Xeric began to perform on them.

If lost, it can be reclaimed by defeating the muttadiles, or from a bookcase within a player-owned house.

The following text is transcluded from Transcript:Houndmaster's diary.

Please, dear reader, blame me not for my sins...

How did I find myself in this damp and smelly hell-hole? I fear I can no longer leave; woe to those brave enough to try. I had received a letter, a request for my skills in hound mastery, to replace a creature keeper who had 'retired'. Or so the letter claimed.

Sadly the truth is that anyone could have done this, but the pay was too good to refuse.

Admittedly the location was a little odd - a mountain top, far to the west? Unfortunately I am but a man controlled by greed, and for that I now pay dearly.

In the beginning, there were hounds to care for, more than a dozen strays. They seemed to enjoy my company, and I enjoyed theirs.

My employer, Lord Xeric, was conducting various experiments on the hounds.

Using the powers of this strange place, he sought to speed up the mutation.

I was too scared to say anything. I'd heard wild rumours of the things hidden within these dark walls.

I dared not think it - I focused all my energies on the task Lord Xeric had assigned me, so that I would not experience his displeasure for myself!

The crystals? The beast below? Science? Something down here made Lord Xeric's experiment a success, or at least that's what he tells me. I fail to see the success of his creation.

It had to be her though, of course it did. She was the strongest of the pack, my personal favourite, now a twisted, scaly abomination.

Does she even remember me anymore? Would I want her to?

Certainly not after what I've done!

I'm not proud of it, but it keeps me alive enough to fulfil Master's demands, keeping her - no - keeping IT alive.

When I believed that this situation couldn't become worse, I was a fool!

Before Master began his wretched experiments, we failed to notice her... condition. There's two of them now.

Perhaps I'm the true monster after all.

A byproduct of the experiments is what keeps the creatures fed and well. My new role is more of a gardener than anything else.

Now I labour in an incredibly draining job for a master who hasn't been here for months. Is my position a little more permanent than I had realised?

The mountain just shook! Has Master returned to us?

I must check on them, for he certainly will return if I fail him.