House on the Hill

The House appears to resemble buildings found commonly in dragonkin architecture. The western side of the House, which appears to be a port for ships, or possibly a landing spot for dragonkin (as they can fly), is fitted with compass rose, which is a symbol often associated with the dragonkin. East of the house, there is a smaller structure, where in the centre lies a 'Strange Stone', which upon examination the player will read It seems to have been hit with swords. There is no option to attack the Strange Stone however, and using a sword on it does nothing.

Located within the House on the Hill there are three strange machines. 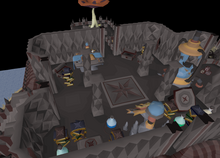 The inside of the House on the Hill, filled with stacked books and strange machines.

In addition, one of the four Magic Mushtrees on the Island can be found here, allowing quick access to other parts of the island by teleporting here via digsite pendant, then using the magic mushtree to travel.

Within both floors of the House, there are five stone chests with a search option. Searching the stone chest will ask for a numulite. After inserting the numulite, the chest will give the search option to insert 100 numulites into the hole. The chests have a chance of having nothing happen, dealing damage, or giving one of various notes. The notes can be added to the player's Fossil island note book. 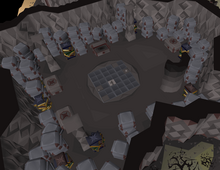 The House's basement. In the centre lies a strange grid with missing pieces.

Within the basement of the House is a pile of books, found behind the ladder, that can be searched to obtain an ancient diary.