From Old School RuneScape Wiki
Jump to navigation Jump to search
The RuneScape Wiki also has an article on: rsw:Humans Against Monsters

Humans Against Monsters, abbreviated as H.A.M., is a human-supremacist cult who believe that humans are the most pure of Gielinor's creatures, and aim to rid Gielinor of all races that they perceive as monsters, such as goblins and ogres. They pursue their objective by recruiting others to their cause and lobbying the authorities of Gielinor, such as Duke Horacio and King Roald, to do something about them, believing large-scale slaughters are necessary[1]. H.A.M. also possess a very warped view of the history of Gielinor, believing things such as the hero Arrav of Avarrocka slaughtering a tribe of goblins instead of forming a treaty with them. 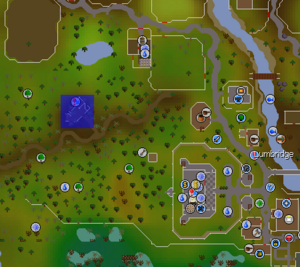 The entrance to H.A.M.'s headquarters.

Most of H.A.M.'s members consist of refugees from settlements destroyed by less civilised races, such as goblins, and they operate from the caves that monsters once inhabited, claiming to clean out and defend these caves so monsters can no longer inhabit them. Their main headquarters is located in a cave underneath a ruined building along the dirt road from Lumbridge to Draynor. All members wear the iconic magenta H.A.M. robes as their uniform.

Although H.A.M. purports to be a Saradominist organisation, the ethics of members acting in the interests of the group have been the subject of much controversy. Some of their more extremist members, such as Sigmund, have been known to kidnap, steal, torture, and murder to accomplish their goals. This has led some people to accuse the organisation of being nothing more than a violent cult. However, most members do not wish to be involved with killing, at least not themselves. 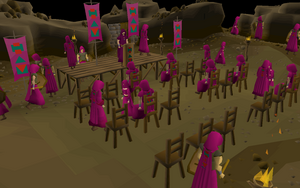 A group of H.A.M members in their headquarters.

Although many members consider them inferior to humans and express distaste for them[2], H.A.M. do not officially consider human-like races such as dwarves and gnomes to be monsters, and as such have not made any efforts to wipe them out[3].

The following quests involve the H.A.M. organisation or at least one of its members: