The hunter's crossbow is bought from Leon for 1,300 coins in the hunting shop in Yanille. It cannot be crafted by players.

Though somewhat inaccurate compared to a magic shortbow or an adamant crossbow (which require a similar Ranged level), it is a popular weapon for PvP due to its firing speed and low cost. 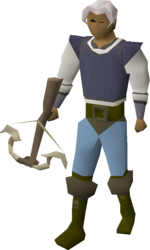