From Old School RuneScape Wiki
Jump to navigation Jump to search
This article is about the Slayer monster. For the boss, see Alchemical Hydra. For the superior variant, see Colossal Hydra.
For other uses, see Hydra (disambiguation).
The RuneScape Wiki also has an article on: rsw:Hydra

Hydras are draconic creatures found in the lower level of the Karuulm Slayer Dungeon in Mount Karuulm, requiring level 95 Slayer to kill. They were created by a Dragonkin named Karuulm as a project which is not based on any prior work done by his fellow kin.

Hydras are only assigned as a Slayer task by Konar. There are two areas within the dungeon that contain hydras, one being exclusive to players on a hydra Slayer assignment. As both of these are located within the Karuulm Slayer Dungeon, players who have not completed the elite Kourend & Kebos Diary must wear boots of stone, boots of brimstone, or granite boots to protect themselves from the extreme heat of the dungeon floor, or else they will take rapid damage.

Killing a Hydra is a requirement for the elite Kourend & Kebos Diary. The Alchemical Hydra boss is task-only, but the standard Hydras found on the lower level of Mount Karuulm are not, so the achievement can be boosted using a Wild pie or other temporary skill boost. 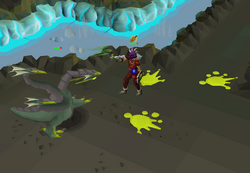 The poison splats launched by the Hydra.

Hydras start off with a random combat style at the start of the battle, switching after three attacks, regardless if they hit or not. The magic attack appears as a trio of three dark green trails of spit shot from the left head, and arching to the player (not to be confused with the poison splats, which are light green orbs), while the ranged attack looks like a throwing knife being launched at the player from the right head, moving straight forward. During the fight, the middle head of the hydra will spit poison at three random tiles (one at the player's location, two elsewhere), dealing 4 poison damage every two ticks (or 1 to 2 damage if the player has poison immunity) when the player is standing on one. The initial splat has a 3x3 AoE.

Hydras can drop their eyes, fangs, and hearts, which are used to create the brimstone ring. Much like dark totem pieces, the body parts are dropped in order and additional body parts can be obtained once players have one of each part.

In addition, they can also drop their tail, which is combined with a dragonbone necklace and a bonecrusher to create the bonecrusher necklace.

Drop rates estimated based on 16,739 kills from the Drop Rate Project, unless otherwise cited.

There is a 2/128 chance of rolling the bolt tips drop table.