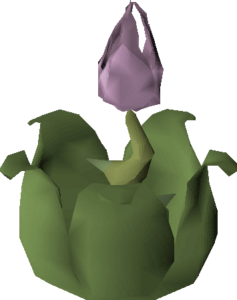 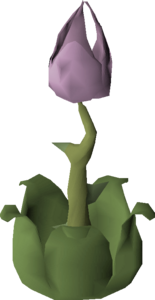 Iasor plant is a Farming plant grown at level 76 Farming. Iasor is a type of anima plant, which don't provide any crops but activate special effects while the plant is alive. It is grown by planting an iasor seed in the anima patch located in the intermediate tier of the Farming Guild. The seeds are obtained exclusively from the Hespori. Planting an Iasor seed gives 100 Farming experience.

From the moment the seed is planted, the Iasor plant will decrease the chance of farming patches becoming diseased during growth by 80%[1] worldwide. The plant will provide this effect for approximately 3.5 days (8 x 640 mins) before dying. To maximise the duration of the plant's effects, it is recommended to plant it ~10 minutes after the farming tick occurs in the following times (UTC):

The next growth stage will occur in approximately 9 hours and 37 minutes (refresh).

Once the Iasor plant reaches its eighth growth stage (~74 hours after planting), it will begin to take on a withered appearance, indicating the plant will die in the next growth stage, though the benefits will remain until death. In order to reap the Iasor plant's benefits again, players must clear the anima patch and plant another Iasor seed. The plant cannot be resurrected with the Resurrect Crops spell.