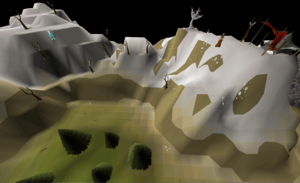 Ice Mountain is located just northwest of Barbarian Village, and the main entrance to the Dwarven Mine is located on its lower southern slope. It dominates northern Asgarnia, and is Asgarnia's only remaining region in which it snows year-round.

Players can walk there fairly easily from Falador (go north and northeast) and from the region of Barbarian Village and Edgeville (go west). Other transport routes to the mountain include:

The mountain is accessible from its eastern side, from the ramp marked by two standing torches.

The mountain is dotted with dead trees. The northern peak has a White tree, which is featured in the Garden of Tranquillity quest, and the Oracle, who is involved in the Dragon Slayer quest and some Treasure Trails clues. The Oracle has tattered clothing, and she is white from staying in the cold so long. When talked to, she gives random pieces of advice and RuneScape versions of old sayings. On Members' worlds (only), icefiends roam the mountaintop and are good training monsters for lower-levelled players.