The Ice Queen is a quest monster fought during the Heroes' Quest. She can be found in her lair beneath White Wolf Mountain.

Her only drop is the ice gloves, a quest item used in the Heroes' Quest. However, she can be fought without starting the quest. The gloves are also optionally used in several other quests, notably Recipe for Disaster (Flambeed) and Desert Treasure I (Fareed), and are required for the completion of The Fremennik Exiles.

50 Mining(boostable) is required to reach the Ice Queen.

How to get to her[edit | edit source]

Warning: her lair is a multicombat area and she is surrounded by level 57 ice warriors who will attack you.

Safespotting: If you stand behind the throne, you can avoid the ice warriors and can still attack the Ice Queen if positioned right. 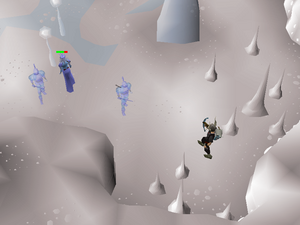 A player safespoting the Ice Queen.

Note: You can also do a similar method and much safer if you are able to only hit 0's with an alt or friend, while using vengeance and recoils on that account to lower her hitpoints much faster. Hitting zeroes will ensure you can hit the queen with the skiller while the alt will be tanking. Remember to hit when she is almost dead, and if you are using a suffering and she is nearly dead, deactivate the effect so she won't die before you actually hit.