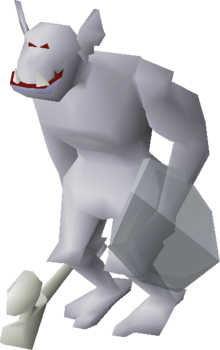 Ice trolls (also styled as Ice Trolls) are level 120-124 monsters encountered during Desert Treasure when the player is trying to get the Ice diamond. Five trolls have to be killed to gain access to the ice cave on the eastern side. They are also encountered during Troll Romance where the player has to navigate through the cave leading to Trollweiss Mountain.

Use of Protect from Melee is advised as they frequently hit 20s. It is recommended to kill the level 123/124 variants as they have lower hitpoints and Defence. If the player is killing ice trolls located beyond the ice gate, the use of super restore potions or restore potions and Prayer potions are needed in order to mitigate the stat drain.