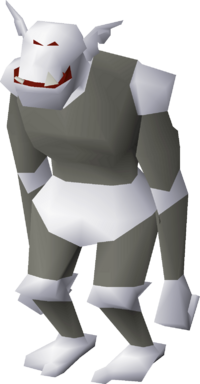 Ice troll grunts are the foot soldiers of the Ice Troll King on the nothernmost isles of Jatizso and Neitiznot. They can occasionally hit hard through armour although Protect from Melee prevents all damage. Yak-hide armour reduces the troll's maximum hit and therefore is recommended over armour with higher defensive bonuses for players who do not pray.

Their main habitats are the islands north of Jatizso and Neitiznot, where the trolls congregate. The island immediately north of Neitiznot can be an effective training area if one uses the Honour guards that are always fighting the trolls to assist them.

The grunts' other location is the northern cave systems (the eastern cave before completion of The Fremennik Isles, and the western cave after). This cave has many Ice Trolls including females and males.

Drop rates estimated based on 2,280,172 kills from the Drop Rate Project, unless otherwise cited.

This version is found throughout the area north of Neitiznot and Jatizso.

There is a 11/128 chance of rolling the uncommon seed drop table.

This version is found only in the western portion of the Ice Troll Caves.