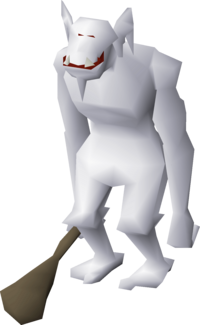 Ice troll runts are the lowest levels of Ice trolls found on Jatizso and Neitiznot. Despite possessing only a slightly higher combat level than Mountain trolls, they can hit much harder (up to 17) and are much more aggressive, often attempting to engage the player from several squares away. They also have the ability to hit through armour, similar to Verac the Defiled. Yak-hide armour does not reduce the troll's maximum hit. It is advised to use the Protect from Melee prayer whenever engaging more than one at a time. Ice troll runts are often found near Ice troll females; when they're not, they will be spread farther out.

Ice troll runts are found on the northern isle with the rest of the ice trolls, and in the cave systems (the eastern cave before completion of The Fremennik Isles, and the western cave after). They're also found south of the bridge to the troll isle just north-west of Neitiznot. In this location, they tend to engage in combat with the Honour guards just east of the bridge. While they prefer to attack the guards, they will attack a player if the player is their first target, until they grow tolerant of the player.

The player can receive aid from guards slaying ice troll runts on a troll task while killing them quickly with a dwarf multicannon. However, if a guard deals the finishing blow or attacks a runt as it dies in the same tick as the player, the Slayer experience gained will be halved but items will still be dropped.

The ice troll runt drop table is somewhat unusual, in that it varies depending on the exact version of monster being killed. The versions all look identical. There are three different drop tables, with the drop table used determined by the troll's spawn point. Variant 1 is a table unique to ice trolls, variant 2 is the low-level troll table used by mountain trolls, and trolls with the variant 3 table will drop nothing but bones. The third table is exclusive to trolls in the western Ice Troll Caves, and may be avoided.

Ice troll runts are commonly killed for their chance to drop the Granite Shield and Rune Kiteshield. This makes it important to differentiate between variant 1 which drops these shields and variant 2 which does not.

Drop rates estimated based on 2,280,172 kills from the Drop Rate Project, unless otherwise cited.

This version is found throughout the area north of Neitiznot and Jatizso.

There is a 11/128 chance of rolling the uncommon seed drop table.

This version is found inside the Jatizso mines and north of Neitiznot where the Honour Guard are.

This version is found only in the western portion of the Ice Troll Caves.