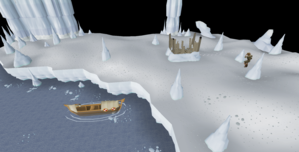 The Iceberg is a plain iceberg in the sea. It is the location of the penguin base. It can only be accessed by those who have gone half way through Cold War.

You can travel back to the Iceberg after the quest is completed by talking to Larry on the dock east of Rellekka.

If one is wearing a clockwork suit, it can be entered via the avalanche to the north-west of Larry's boat.