Icthlarin (pronounced "ick-thlar-in") is the Menaphite god and guardian of the dead. He is the son of Tumeken and Elidinis and brother of Amascut. He was the original leader of the Mahjarrat before they defected and joined Zaros. Unlike most gods, Icthlarin wasn't banished by Guthix following the God Wars. He is responsible for guiding the souls of the deceased to the Grim Underworld.

Icthlarin was presumably born in the early Second Age to the gods Tumeken and Elidinis. Together with the other gods of the Menaphite Pantheon, Icthlarin helped establish and rule the Kharidian empire, one of the most prosperous areas on Gielinor at the time.

Icthlarin was the original leader of the Mahjarrat, a race of very powerful beings originating from the world Freneskae. The Mahjarrat served Icthlarin for an unknown period, before they defected and joined Zaros and his empire.[1][2]

At some point, Icthlarin began to face trouble from within his own family. His sister Amascut, the then-goddess of rebirth, was driven insane and declared herself The Devourer, intent on feasting upon the souls of the deceased[3] and reap destruction upon the land, in direct opposition to her brother and the rest of the Pantheon, whom she now held in great contempt. Icthlarin and Amascut have been locked in a rivalry ever since.

Sometime after her metamorphosis, Amascut began to destroy her own temples and clergy. In response, her followers, including Neite - then one of Amascut's chief priestesses - rose up against her, cursing her that her name would be forgotten, any body she held would cast her out before long, and never again could she assemble willing disciples. Amascut, however, retaliated with a curse of her own, binding her priests in her own form, dooming them to walk the world as cats, which she in turn grew deathly afraid of.[4]

Icthlarin, seeking to protect Neite and the others from his sister's wrath, brought them under his wing, gifting them with immortality that they may never die from natural causes.[5] Around the same time, Icthlarin also appointed the Sphinx as the guardian of feline kind, safeguarding them against the agents of the Devourer in return for eternal life.[6]

Amascut's insanity would cause great problems for Icthlarin, as in addition to causing troubles on the surface, she had created beasts to prowl the underworld, eager for souls to devour. This meant that escorting and guarding souls through the underworld took up more of Icthlarin's time, and meant that he would not always be successful, with many souls being devoured by Amascut's beasts. Icthlarin's role now consumes so much of his time that he has little time to devote to what happens on the surface, only interfering when he absolutely must.[confirmation needed] 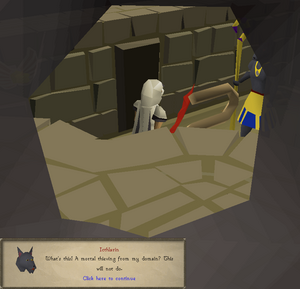 In the year 169 of the Fifth Age, Amascut sought to obtain the soul of Klenter, a recently deceased High Priest of Icthlarin. To this end, Amascut, disguised as a Wanderer, hypnotised a passing adventurer into infiltrating his tomb and stealing one of the canopic jars. This act of depravity, however, did not go unnoticed by the god of the dead, prompting Icthlarin himself to appear before his sister's latest tool and relinquish the Devourer's hold over them, denying Amascut Klenter's soul. Additionally, he summoned Klenter's ghost to Sophanem in order to help protect his soul. Although the plan was thwarted, Amascut enslaved another adventurer whilst Icthlarin's clergy performed a ceremonial burial ritual for Klenter. The two forces remain locked in this battle until one of the two give up.