From Old School RuneScape Wiki
Jump to: navigation, search
The RuneScape Wiki also has an article on: rsw:Icthlarin's Little Helper

Icthlarin's Little Helper is the first quest in the Desert quest series. The quest introduces the Menaphite demigod Icthlarin and explores the pyramids of the city of Sophanem.

NOTE: If you need to leave Sophanem at any point during the quest, there is a hole you can crawl through on the eastern wall. To get back in, enter the rocks on the east side of the Wanderer's tent.

Collect all the supplies needed for the quest including your cat. Use the Nardah teleport if you have one or use a magic carpet ride (or fairy ring code DLQ) and head to the Wanderer in the desert. The Wanderer will have a strange reaction to your cat. Ask her why she has a problem with the cat. She will tell you that if you get your cat away from her, she would tell you about the secret entrance to Sophanem. Wait, and you will automatically pick up your cat. She will then ask for a tinderbox and full waterskin. Once you give them to her, she will hypnotise you and you'll enter a small cave just north-east of her tent. You can now use this passage to enter the city at any time, including if you die, which will give you the quest items back. 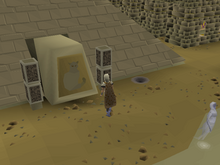 You will end up outside a pyramid in Sophanem, and a canopic jar will appear in your inventory. Touch the Northern door of the Southern pyramid. (There is a picture of a cat on the door) (Note: If you take too long, a spectre will attack you and steal some of your gold.) Touching the door will trigger the first flashback.

WARNING: Once you begin a flashback, you will be unable to teleport away until you either finish it or die. You will have to walk to the entrance if you need to leave. Make sure you are prepared.

Every now and again during the quest, you'll experience a flashback where you remember what you did while you were hypnotised. You need to play through these in order to progress through the quest.

Important note: Using the mini-map to navigate the pyramid will automatically avoid the traps (both the wall-crushers and pit traps) and is much more time efficient than manually navigating it.

Touch the door of the pyramid to begin the first flashback. During the flashback, you will need to go through the pyramid. You'll see some wall crushers. Stand on the opposite wall and don't go next to them, as they will damage you if you do. Once you're past the crusher blocks, you'll find pit traps in the next hallway. If you step on the wrong spot, you'll fall into a pit and end up at the beginning of the pyramid. You can move forward by clicking on the map, and your character will avoid the traps automatically. To avoid traps, stay along the left wall until you pass the whitish rectangle on the wall, and then go to the right side. Continue walking until you are opposite a square. Go back to the left side until you pass a candle. Switch to the right wall once more. 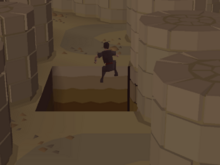 You'll see mummies (level 84). They will attack you; simply go past them. You'll also see Scarab swarms (level 96) crack out of the ground. They hit 2 damage on you really fast and can do a 2 damage poison condition. Continue to some more wall crushers. Past these—you'll eventually find a large pit. Jump over it. (You'll need 20% run energy (30% at low agility levels)—it is recommended you have both hands free when attempting the jump. If you fail, you'll reappear near the second set of wall crushers.)

Go to the west door and try to open the door. Now, you need to solve a puzzle. The objective is to flip all of the tiles onto their gold sides. There is no required number of flips that you must make, nor is there any limit of tries. Each time you flip a tile, the nine tiles in a 3x3 grid will also flip. To solve this puzzle click on the squares in the order shown on the image below (make sure the puzzle is in the default position as shown below. To get to the default position, right click on the gold solution to reset. Keep hitting the "reset puzzle" button until the puzzle looks as shown in the picture below). Once you've solved it, you'll wake up fully healed outside the pyramid.

After you finish the flashback, talk to the Sphinx with your cat out. Ask for help and the Sphinx will ask you this question: "A husband and a wife have six sons and each son has one sister. How many people are in the family?" The answer is 9 (each brother has a sister, since they're related there can only be one sister. 6 + 1 + 2 parents = 9). If you guess wrong, you will lose your cat! Once answered correctly, you will receive the Sphinx's token, so you can speak to the High Priest.

Go to the High Priest, located in the south-west corner of the city, and ask him about the remains. He will tell you to put them back in the burial chamber.

Return to the pyramid, and select open door. Your cat will help you get back inside. Go through the pyramid using the same steps as in the first flashback. Before you jump the pit examine the canopic jar in your inventory! so you know which one to choose later. When you jump across the pit, you'll enter the second flashback. 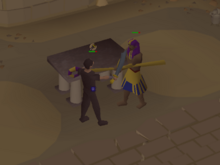 The second flashback begins where the first one left off—on the other side of the pit. Open the unlocked door of the west room. Examine the four jars to find which one you used to have in your inventory. If you don't remember, you can open your quest journal to figure out which jar you need to pick up, which will be stated by the major organ inside of it, or just try them all. The player will only take the correct one. As soon as you try to pick up your jar, a guardian will attack you. It can be anywhere from level 75 to level 81. It attacks with Magic and Melee. Use the Protect from Magic prayer or take off your armour to kill it with melee. Once you've defeated it, pick up the jar. Leave the room and jump across the pit again. The flashback ends.

After the flashback is over, you will feel regret and you will say to yourself that you think you should put the jar back. Jump the pit and go to the west door. You will need to solve the same door puzzle to enter the room. Once you turn all of the tiles to their gold side; you will automatically enter the room. Drop the canopic jar where you found it and go back through the pyramid, across the pit, past the monsters, and past the traps to the High Priest. You can jump across the pit with an item in your hand to skip to the start of the pyramid (you will take 5 damage).

Note: Jumping with an item in hand is not guaranteed to cause you to fall with higher agility levels.

Talk with the High Priest. He will ask you to prepare a ceremony. You will need to help the Embalmer and the Carpenter. If you used Protect from Magic during the fight, recharge your prayer points at the altar here.

Find the Embalmer in the building south of the High Priest, near the water symbol, and talk to him. He will ask for a bucket of sap, linen, and a bag of salt. Tell him you will get the items later. The salt can be found by using an empty bucket on the pond north of Sophanem and then using the full bucket on the centre piece east of the embalmer, and buckets of sap can be obtained by using a knife with an evergreen or a pointy regular wood tree with the description "A commonly found tree" while you have a bucket. If you didn't bring sap, you can get some from the latter kind around Lumbridge or the Grand Exchange. The linen can be bought from Raetul for 30 coins. He is located in the north east part of Sophanem, near the silk stall.

Then, head to the city's eastern side to find the Carpenter, who can be found near the Pottery Wheel. He needs a willow log to make a holy symbol. Talk to him again to give him your willow log. After the quest, the Carpenter will buy willow logs from you at 40 coins each in groups of 1, 2, 5, 10, and 20 (he stops doing this after the completion of Contact!). After a short wait, the carpenter will give you the symbol.

The Carpenter or the Embalmer (whoever you helped last) will tell you that the High Priest began the ceremony without you. To find him, go back into the pyramid past the traps and the pit. As you cross the pit, the third flashback will begin.

You will now have an unholy symbol in your inventory. Your character tells you that your mistress wants it inside the pyramid so she can teleport there. Enter the east room and use the symbol with any sarcophagus around the walls. Leave the room and the flashback will end.

Note: If you plan to defeat the Possessed Priest with a Dwarf Multicannon, it is a good idea to place the cannon in the room right now. It will be waiting for you once finished the flashback, and it will be easier to jump the gap. 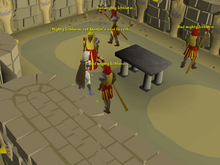 The Ceremony started and the player was too late.

You will speak to yourself again showing your regret for causing harm to the town. Jump across the pit again and re-enter the eastern burial chamber. After a cutscene, you'll learn that the Wanderer was behind it. She is really the Devourer, an evil goddess, and she'll possess one of the priests.

You will fight a level 91 Possessed Priest. You can use Protect from Magic and kill him. Once you have dealt with him he drops a four-dose attack, strength, magic, agility, or defence potion (Ironmen may wish to keep the agility potion if they plan on doing Tai Bwo Wannai Trio, should they receive it). Talk to the High Priest again, and you will experience the last flashback.

Note: If you take too long to defeat him, the message "The priest seems to have recovered from the Devourers spell" will appear, and you will have to exit the door and re-enter to face him again with full Hitpoints. 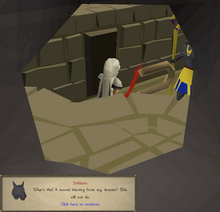 Icthlarin, god of the dead stops the player from stealing.

After talking to the High Priest, you will see the final flashback as a cut-scene. You will be escaping from the pyramid, and Icthlarin, god of the dead, will dehypnotise you.

You will find yourself back in the eastern burial chamber. Head outside and talk to the High Priest to complete the quest.

If you equip your catspeak amulet and then talk to your cat about being confused, you will unlock another cutscene! Talking with your cat again about being confused will tell you the story of the quest as it understands it. If asked again, your cat will refuse to explain it again and instead tells you to ask one of your adventuring buddies and the chat option will go away.

PS: If you happen to have a Hellcat or kitten, you will lose your cat after the cutscene is over. You just have to logout and log back in for the cat to reappear. 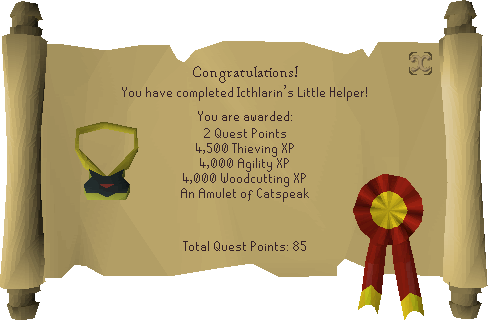 Completing this quest is required for: