The Icyene Graveyard is the private graveyard of the Hallow family, the ruling family of Hallowvale, where every member of the royal family was buried.

When she was still in power, the ruler of Hallowvale, Queen Efaritay Hallow, had a large mausoleum built in the graveyard, which was built to one day house her and her human husband, King Ascertes Hallow. However, it instead became the final resting place of Larina Hallow, daughter of Efaritay and Ascertes, and sister of Safalaan Hallow.

During the quest Sins of the Father, Vanescula Drakan meets with The Myreque here to propose a plan to kill her brother Lowerniel Drakan, and to also reveal to Safalaan his half-icyene heritage and the fate of his family.

North of the graveyard, a mud mound can be found, in which digging it with a spade will give the player a journal page and an ancient armour.

The location is unlocked during Sins of the Father, and can be accessed during and after the quest via the boat in south Burgh de Rott. 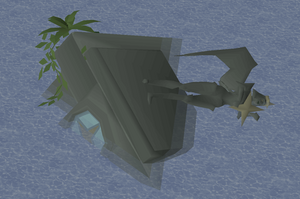