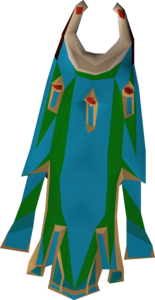 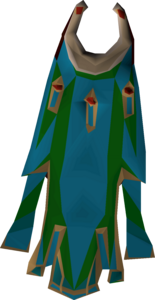 Like the other max cape variants (a max cape combined with another cape slot item), the imbued Guthix max cape does not have the max cape's stats or perks; it only acts as a cosmetic upgrade to the imbued Guthix cape. However, the cape can still be used to perform the Skill Cape emote.

Mac is able to refund a max cape, along with its variants, for 1,821,600 coins each, as long as the player has both the hood and cape in their inventory. It is important to note that capes combined with the max cape will be lost upon refund and will need to be earned again.

Upon death in the Wilderness (level 20 and above), if the item is unprotected, it will be converted into coins when dropped. If the player dies below level 20 Wilderness, it will remain in the player's inventory. However, the item will be unusable and must be repaired with 99,000 coins by using the item on Perdu.