An imp-in-a-box is made by catching an imp with a magic box. It can be used to send items from anywhere to the bank.

It is used by right-clicking on it and choosing "Bank Imp-in-a-box"; then, a window will come up where the items to be sent to the bank can be selected (be careful to not click twice quickly, because items can move after clicking on the first one). Alternatively, simply use an item on the box for it to be sent to your bank. This method is a quick way for players with higher Hunter levels (71 required to catch imps) to quickly bank items. The imp will agree to take two items or stacks from the player to the bank in exchange for its freedom; however, it will refuse to do so in PvP areas, such as the Wilderness and PvP worlds, whilst in combat. Thus, the player may bank items in PvP areas provided the player is not in combat and below level 30 Wilderness.

Tele Block will also prevent banking with the box. If it is not one of the protected items, the imp-in-a-box is converted to a magic box upon death in the Wilderness. 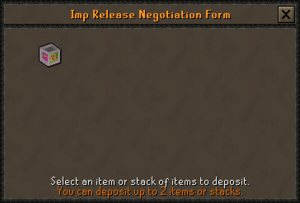