The Wizard Grayzag has summoned hundreds of little imps. They have stolen a lot of things belonging to the Wizard Mizgog including his magic beads.

Make your way to the Wizards' Tower, south of Draynor Village and over a long stone bridge. Climb the stairs, and go up to the 2nd floor[UK]3rd floor[US]. Talk to Wizard Mizgog and ask him questions to find out that he needs your help. He will tell you that Wizard Grayzag's imps have stolen his beads and he wants you to get them back for him. He needs you to collect:

To obtain the beads, you may buy them from the Grand Exchange for a total of 7,245, receive them in a trade with another player, or you can simply kill imps instead. Imps can be found throughout Gielinor. There are several good spots to kill imps including: east of the Ardougne Monastery, on top of the Karamja Volcano (be aware of level 14 scorpions in this area), next to the Charcoal Burner, or by the southern entrance to Falador. Imps may teleport away when in combat making them harder to kill, beads are also an uncommon drop, thus many players will often trade for beads instead to avoid the hassle of finding the beads themselves. If you choose to kill them yourself or are an ironman, it may be an advantage to use ranged/magic attacks to reduce the running around when the imps teleport.

Once you have all four beads, return to Wizard Mizgog and give them to him to finish the quest. He won't accept them one at a time, so ultimate ironmen should plan to get the whole thing done at once. 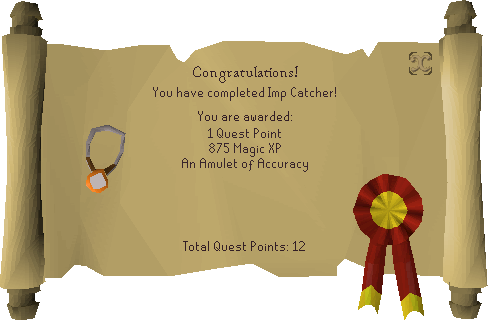