In Aid of the Myreque/Quick guide

Items needed: At least 1 piece of food you don't mind losing (5 pieces is recommended if running past ghasts without a druid pouch), a pickaxe, a spade, 1-5 buckets, a hammer, 44 nails, 11 planks, 1 swamp paste, 3 tinderboxes, 10 bronze axes, 10 raw mackerels or 10 snails (depending on what is asked).
If Shades of Mort'ton has been completed, a hammer, planks, and swamp paste can be purchased from Razmire Builders Merchants in Mort'ton and the tinderboxes, axes, and mackerels/snails can be brought noted then sold to Razmire General Store to unnote them. You cannot use the general store trick as an ironman.
Items recommended: Mort'ton teleport or fairy ring BIP

You now have access to the Burgh de Rott bank.

Items needed: Hammer, tinderbox, 2 steel bars, 1 coal, Efaritay's aid or a silver weaponry such as a silver sickle (b), and some food for lower-levelled players.

Items needed: Combat equipment, including silver weaponry or Efaritay's aid to defeat 2 level 75 or 4 level 50 Vampyre Juvinates. Deposit any followers you have into your bank as Ivan Strom will refuse to leave if you have one, even in your inventory.
Items recommended: To give to Ivan Strom: Steel med helm, Steel chainbody, and Steel platelegs, 15 pieces of cooked food (snail, salmon, slimy eel, or stew)

The rod of Ivandis[edit | edit source]

Items needed: Hammer, soft clay, mithril bar, silver bar, a water rune or staff, a cosmic rune, a cut sapphire, and a rope.
Items recommended: Teleports to a furnace and back to Burgh de Rott 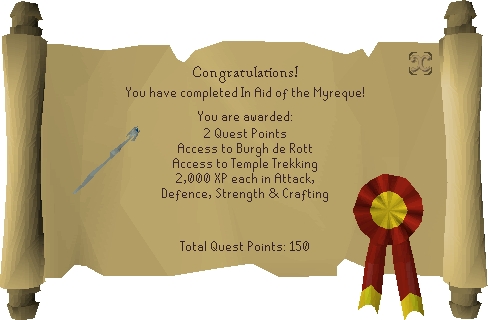 Completion of In Aid of the Myreque is required for the following: