In Search of Knowledge

In Search of Knowledge is a miniquest which involves the player filling three tomes found in the Forthos Dungeon's Temple Library.

Note: This miniquest is best completed while completing Spiders, Zombies, Red dragons or Sarachnis slayer tasks, which effectively turns this miniquest into a passive grind, which saves time in the long run.

Upon killing any monster in the Forthos Dungeon, they may drop tattered sun pages, tattered moon pages and tattered temple pages. Gather four of each, which will be used on tomes obtained later in the miniquest. While players may kill any monster in the dungeon, Temple Spiders are the best monsters for tattered page collection, as their page drop rate is 1/30 and can be killed quickly. Another viable option is to kill Red dragons and Baby red dragons with dragonbane gear; the former of which has a very high drop rate of 1/10.

Once four of each page has been obtained, players must heal an injured monk, Brother Aimeri, to begin the miniquest. He can be found by the entrance of Sarachnis. By giving him at least five pieces of food (which must be fish, meat, or vegetables), he will heal to full health. 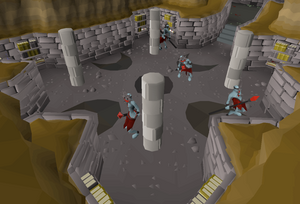 The temple library, where the tomes are found.

Ask him who he is, and he will say he is here to discover the origins of his religion, and asks that you let him know about anything of interest that you find. Once you say "I'll keep my eyes open", the miniquest will begin. Make sure you see this dialogue, or else you won't be able to obtain the tomes.

Head further west in the small corridor until you reach a room with undead druids; it is recommended to have the Protect from Magic prayer active, as their magic attacks are accurate and hit hard. Search all except the north-western shelves in the temple library; you should have obtained three tomes: the tome of the sun, tome of the moon and tome of the temple.

The books are lost on death, so if you die from a monster in the dungeon, you will need to search the bookshelves again to get the books back. They will keep any pages you had filled them with.

Use the pages obtained earlier on the respective tomes. Once filled, they can be used on Logosia in the centre of the Arceuus Library, rewarding you with a lamp of knowledge that gives 10,000 experience in a skill of your choice that is at least level 40.

After the miniquest, additional pages received can be sold to Logosia in exchange for 1,000 coins per page. You may also tell Logosia, "I'm going to stop looking for temple, sun and moon pages," to stop receiving them.