The Inferno is a solo minigame that was added to Old School RuneScape on the 1 June 2017, along with an update to the city of Mor Ul Rek. The player must survive 69 increasingly challenging waves, ultimately killing the level 1400 TzKal-Zuk. If defeated, the player has to restart from the first wave. A spiritual successor to the TzHaar Fight Caves, the Inferno was dubbed the greatest solo PVM challenge to date upon release.[1]

A Slayer task of TzHaar does not take effect in the Inferno. If the player has previously defeated TzKal-Zuk, it may be chosen as a Slayer task when assigned TzHaar, which will affect all monsters inside the Inferno. The task will also be cancelled in the event the player is defeated, much like Fight Caves. To prevent free practice, the Inferno cannot be accessed on unrestricted worlds.[2] Restocking between waves is not possible and other players cannot enter, although the minigame can be paused by attempting to log out between waves. Purple sweets also cannot be used in the Inferno.

According to TzHaar-Ket-Keh, the Inferno was originally a large incubation pool for newly hatched TzHaar to regain memories of their ancestors. The TzHaar found out that the deeper they placed the eggs, the TzHaar emerging from them would gain more memories and knowledge of their old ancestors. Unfortunately, they went too far and completely drained the lava, finding an ancient incubation chamber. They decided to place eggs in there, but it completely backfired and caused the creation of new, volatile volcanic creatures that were extremely aggressive and fought for dominance. The TzHaar struggle against these new monsters and are hesitant to allow humans to tackle them. Similarly to humans, these monsters are foreign to TzHaar, as their names are prefixed with Jal, meaning "foreign" in the TzHaar language.

There are new monsters encountered within the Inferno. Several of these monsters are similar to Fight Caves counterpart, while others are completely new. 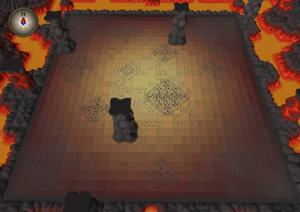 Each wave displays which monster will spawn. There are 69 waves in total. From waves 1 to 66 are three pillars which the Jal-Nibs attempt to destroy. Each pillar has 255 hit points. Any remaining pillars by the end of wave 66 are automatically destroyed by the start of wave 67. 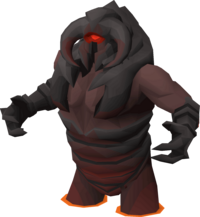 On the 69th and final wave, TzKal-Zuk will break free from the northern wall. Floating in the lava and moving back and forth between it and the player is a small piece of the wall, which must be utilised as a shield to protect from TzKal-Zuk's attacks. If it attacks the player, it cannot be protected against and it has an extremely high max hit of 251, which has a high chance of killing even a fully healed player. TzKal-Zuk cannot be reached with melee and it has 1200 Hitpoints.

Throughout this fight, other monsters spawn periodically and on cues. Jal-Xil and Jal-Zek will regularly spawn behind the player, attacking the shield until they are attacked, whereupon they retaliate. When TzKal-Zuk is below 480 Hitpoints, a JalTok-Jad will spawn behind the player, similarly attacking the shield. When TzKal-Zuk is below 240 Hitpoints, four Jal-MejJaks are spawned, rapidly healing it. When they are attacked, they stop healing and attack the player with area-of-effect blasts.

Once players manage to defeat TzKal-Zuk, they will be rewarded with the infernal cape.

Tokkul is also given, with increasing amounts based on the wave they were defeated on (16,440 maximum; this is doubled if the player has completed the elite tier of the Karamja Diary). 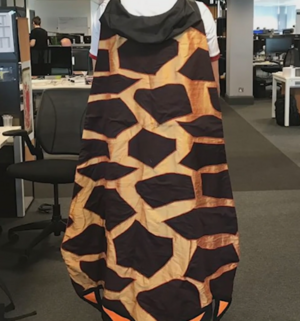 The first Ironman players to complete the Inferno were congratulated by the Old School team:

The concept of a Fight Cave expansion and "Jad 2" was first teased at RuneFest 2015, which was slated for a summer 2016 release. Here, upon defeating TzTok-Jad, players could choose to claim their fire cape or sacrifice it, the latter in which would cause the floor to collapse and fight subsequent waves of more powerful monsters, all culminating into fighting "Jad 2".

A Developer's Blog was released on 11 January 2016, where it was revealed that the rewards would be one of three capes, each of them boasting best-in-slot stats for each combat style.

The proposed stats for the capes obtained upon defeating "Jad 2" was as follows:

The Fight Cave expansion was polled in Old School Content Poll #38: Jad II, Deadman & Zeah, failing by 2.5%. Shortly after the poll ended, another Developer's Blog was released, now referring to the expansion as The Inferno and its boss as TzKal-Zuk.

The blog now revised the design as entirely separate from the Fight Cave, now revealing that the player will face 40+ waves of six new TzHaar creatures leading to the fight against TzKal-Zuk. In addition, the rewards were reduced to only the melee cape from the previous blog.

The blog also stated that the Inferno was planned to be released around mid-February due to a gap in the Old School Team's release schedule, but due to it now being pitched as a separate piece of content, releasing it then would result in the graphics suffering as a result, likely having to re-use a lot of assets from the TzHaar area.

Because of the tight release schedule past February (Monkey Madness II, seasonal Deadman Mode, Zeah batch 2 (the Wintertodt and the Paradigm of Exodus, now known as the Chambers of Xeric), the team then gave players the option of delaying the Inferno till Zeah batch 3 next year, the city of Keruulm (which is now in-game as Mount Karuulm). Player feedback resulted in Jagex delaying the update til next year.

With February now freed up, another Developer's Blog was released, asking for quality-of-life (QoL) suggestions for their next polls. February would then become known as "QoL month" in the years to come, where the team dedicates the month to requested QoL updates.

Brimstone & The Inferno would later be revealed at RuneFest 2016: 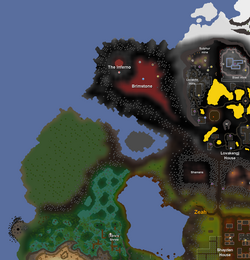 A mock-up of what Brimstone and The Inferno would have looked like on the world map.

Over a year later on 15 March 2017, Jagex released a Developer's Blog, where the Kahlith, a race once created from the TzHaar and born from the core of the Inferno, resided in a village west of Lovakengj within a dormant volcano.

Besides the Inferno, which rewards the now-named infernal cape, it was proposed that players would be able to pickpocket the Kahlith for gems and tokkul, fishing infernal eels and attackable Kahlith citizens that would drop Kahlith armour.

After a day of feedback, the blog was quickly revised, changing the location from west of Lovakengj to within the inaccessible section of TzHaar City, now named Mor Ul Rek, with all the content within it renamed (such as the Kahlith armour now being obsidian armour.)