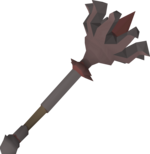 The Inquisitor's mace is a one-handed crush weapon requiring 80 Attack to wield. Received as a drop from The Nightmare, it has bonuses nearly identical to the Ghrazi rapier and blade of Saeldor, acting as the crush variant of these weapons, it also has +2 Prayer bonus unlike those weapons.

Once belonging to Phosani, a former Saradominist Justiciar and one of the founders of Slepe, the Inquisitor's mace had remained sealed in the Sisterhood Sanctuary deep beneath Slepe until The Nightmare's arrival unearthed it.

The Inquisitor's mace, along with the pieces of Inquisitor's armour, counts as a Zamorakian item in God Wars Dungeon.

A player attacks an opponent with the Inquisitor's mace.