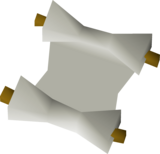 Intel report is obtained during the Shield of Arrav quest and is taken from the dead Jonny the beard. It needs to be taken to Straven for admission to Phoenix Gang.

The following text is transcluded from Transcript:Intel report.

Intelligence Report
There is an archaeologist hanging around the statue on the outside of the city, with mining equipment.
Could she be on to a hidden treasure buried near
the statue?
There is a new channel being dug and a barge being assembled near the digsite. The Varrock museum seems to be paying for it. Could they have information about new treasures?

Previously, the intel report was still obtainable after the completion of the quest.