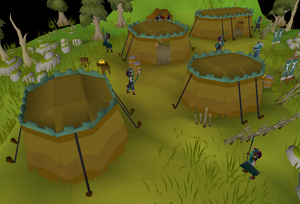 The Iorwerth Camp is a small elven camp found in Isafdar, just outside Prifddinas. It is a small camp of Elf warriors under the command of Lord Iorwerth. The Regicide quest needs to be started to access it, as well as at least 45 Agility (boostable) to reach it. Although there are fightable elves in the camp, if the player has not completed Song of the Elves and thus no access to Prifddinas, it is highly recommended to fight elves in Lletya instead, since there is both a bank and an altar there. Lletya is also much safer and easier to access. The camp also has a loom.

If a player enters the camp during Song of the Elves after the death of King Lathas, the elves will be aggressive toward the player.

A fishing spot can be found to the northwest of the camp. Here, players can catch sharks, but it is not often used because there are no banks nearby. Instead, it is often used for emergency healing because there are also two everlasting fires in the camp. This is provided that the player has the correct level to fish sharks and a harpoon to fish with, unless the player has completed Barbarian Training and has level 96 Fishing and 76 Strength. Slightly to the southeast, there are lure/bait fishing spots. Many players come here (with a fishing rod and bait, or a fly fishing rod and feathers) for elf Slayer tasks and use the fishing spots and everlasting fires to heal. Chickens can be killed in Port Tyras for feathers, south of the camp. Since many players enter the camp by boat, then walk through the forest of traps, killing chickens in Port Tyras for feathers to use later for fishing may be helpful.