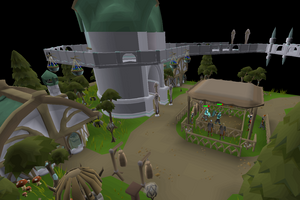 The Iorwerth district of Prifddinas.

The Iorwerth Clan is one of the eight elven clans who were originally brought to Gielinor from Tarddiad by Guthix and Seren in the early First Age. Their former leader, Warmaster Lord Iorwerth, was the initiator of the Elven Civil War due to conquering Prifddinas and seizing the Tower of Voices and the Grand Library, denying access to the city to non-Iorwerth elves. The civil war, which has caused the deaths of thousands of elves, is the reason for the Iorwerth Clan being regarded as an enemy to elven society. Although followers of Seren, their plan to summon the Dark Lord had misled the other elves to believe that they worshipped Zamorak, as the Dark Lord was a name Lord Iorwerth used to sway King Lathas, a secret worshipper of Zamorak, to help the Iorwerth Clan to free the Fragment of Seren.

They are a clan of skilled warriors, assassins and slayers. They are located south-west of the Tower of Voices in Prifddinas, off the southern path.