Crafting is a skill that ironmen typically train through glassblowing, due to its low cost and availability (through Trader Stan's Trading Post, or Farming seaweed and gathering buckets of sand). Many pieces of important jewellery require Crafting, such as teleportation jewellery and amulets of glory.

Before Superglass Make spell: Farming giant seaweed to cook into soda ash (after birdhouse runs) + buckets of sand at a furnace. You can either buy sand at charters or collect it by mining/converting sandstone or collecting sand in Yanille. Or buying soda ash + sand from charters. Fishing trawler is closest to a bank. Note: You should unlock superglass make before doing a considerable amount of Crafting. After glassmake to 99: Continue to farm giant seaweed and mine/convert sandstone from the quarry.

For level 61, buy buckets of sand and soda ash (and seaweed if cooking it into soda ash isn't an issue as it has more stock) at a Trader Crewmember in Port Khazard. This location can be very crowded however, so if struggling to get decent a stock from these traders, the Catherby or Corsair Cove traders may be viable as they are also fairly close to a bank. Smelt these into molten glass at any furnace and then into unpowered orbs (at 46 Crafting) with a glassblowing pipe for Crafting experience.

Complete The Hand in the Sand quest once the requirements have been met as 84 free buckets of sand can be claimed daily from Bert.

One of the most common ways of training Crafting is to gather buckets of sand and farm giant seaweed for blowing molten glass once the player has access to the Superglass Make spell. 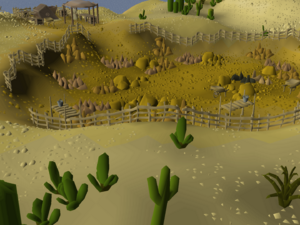 The fastest way of getting buckets of sand is to mine sandstone in the Quarry and grind it using the grinder called Sandstorm just west of the mine. Noted empty buckets can be given to Drew at the grinder. Each piece of sandstone ground provides the player with differing numbers of sand charges (depending on the size of the piece) which can be used to claim noted buckets of sand for a charge of 50 coins per bucket.

Alternatively, players may collect buckets of sand by casting teleport home to Yanille and filling buckets at the sand pit north of the Home Portal. This requires less effort than mining sandstone, but it is also significantly slower. 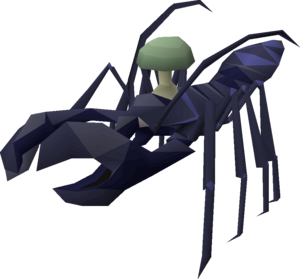 Large quantities of seaweed spores can be obtained by killing lobstrosities in the underwater area of Fossil Island. They can only be damaged by a brine sabre (obtained from brine rats), trident of the seas (obtained from cave krakens) or by using Magic. Low-level Ironmen can alternatively collect spores on the seafloor next to the patches. This can provide anywhere from 10–50 per hour and can be done whilst doing bank skills like Fletching by going up and down the anchor. Alternatively, players lacking 47 slayer can choose to manually cast fire strike on the lobstrosities, which can be easily safespotted from inside an air bubble. The frequent drop rate of seaweed spores by the lobstrosities combined with random spawns within the lobstrosity room makes this method substantially faster than waiting underwater near the seaweed patches. Upwards of 100 spores per hour can be collected using this method. Doing every Fossil Island Wyvern task for seaweed spores is also recommended if planning to farm seaweed.

Once supplies have been collected, withdraw 18 buckets of sand and 3 giant seaweeds before casting Superglass Make to create molten glass. Some of the glass will be dropped on the ground and is not worth picking it up if mining sandstone to obtain the buckets of sand. Blow the molten glass into the highest-tier glass item available for Crafting experience. 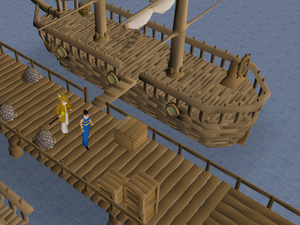 The charter ship method becomes viable once the player has completed Lunar Diplomacy and has level 77 Magic for the Superglass Make spell. This method offers high Crafting experience per hour and does not require any banked supplies. The downside is that there usually is some competition for stock.

Buy buckets of sand and seaweed (or soda ash) from any Trader Crewmember, cast Superglass Make and make the highest-tier glass item available on the spot. Sell the glass items or drop them, hop worlds and repeat. This method will grant approximately 65,000–70,000 experience per hour with lantern lenses and 85,000–90,000 experience per hour with empty light orbs, depending on stock.

It is recommended to use this method in areas that are less popular to obtain the charter ship stock. Using areas like Port Tyras (requires Regicide) or Brimhaven dock, as well as Mos Le'Harmless has a better chance of being stocked. Using popular ports such as Port Khazard or Catherby will result in the Charter ship stock being frequently sold out, resulting in far less experience per hour. 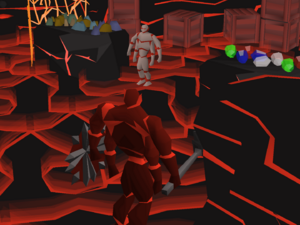 Alternatively, buy gold ore from the Blast Furnace, smelt them into bars then craft them into gold bracelets. They can then be alched for Magic experience. Making unstrung gold amulets is not recommended as they have worse High Alchemy value and only give 5 more Crafting experience compared to bracelets. Players can gain around 42,000 Crafting experience per hour once the gold bars have been obtained.

Players who have completed task sets of the Varrock Diary can buy noted battlestaves daily from a barrel near Zaff for 7,000 coins each. They all have to be bought at once, so a sizeable stack of coins is necessary. Starting at 15 with the easy tasks, each task set doubles the number of battlestaves that can be purchased per day.

Players can also get battlestaves from various bosses and monsters, such as Zulrah, Vorkath, Alchemical Hydra and Skeletal Wyverns.

It is possible to charge the orbs faster by using them manually on the obelisk, one by one.