The ranged skill is mostly trained by ironmen as normal, however an emphasis is placed on affordable and easily obtainable ammunition, particularly in the early-game. Notably, many ironmen do not employ the dwarf multicannon, a common training method for normal players.

Many ironmen choose to use the 10,000 combat experience reward from Shadow of the Storm to skip the early ranged levels, getting to level 27, since there are few quests that reward early experience. Completing Shadow of the Storm, Death to the Dorgeshuun and Horror from the Deep will grant 16,663 experience, enough to elevate a level 1 Ranged to 32 without any actual training. A few of the more attainable quests are

Once the initial levels are out of the way, there are a few more quests that reward range experience:

30 Ranged, players can complete Animal Magnetism, which allows access to Ava's devices, a nearly necessary item for training the skill. 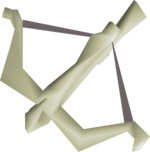 Recommended weapons for Ammonite Crabs, in order of damage output: 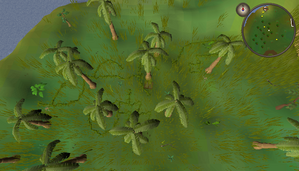 The entrance to Kruk's dungeon.

From level 55 onwards, the best way of gaining Ranged experience is to hunt carnivorous chinchompas and throw them at maniacal monkeys in Kruk's Dungeon on Ape Atoll. It is strongly recommended to unlock the Gwenith Hunter area (requires completion of Song of the Elves) or the red chinchompa hunting ground (requires completion of the hard tasks in the Western Provinces Diary) as soon as possible, as hunting carnivorous chinchompas in other areas is a lot slower and they are usually crowded. Players can also hunt black chinchompas for faster experience, however without high stats and good defensive equipment players are very vulnerable to player killers. Alternatively, players can keep training on Ammonite Crabs, but this is a lot slower than hunting and throwing chinchompas.

Once a high Ranged level is attained, players can gain the remaining experience from killing certain bosses and demi-bosses, such as lizardman shamans, demonic gorillas, Zulrah and Alchemical Hydra.

Ranging Slayer tasks is generally not recommended at higher levels, except when killing certain bosses and demi-bosses. Toxic blowpipe is the only viable option for general Slayer training in terms of damage output, but it is faster overall to use Melee than use a toxic blowpipe and kill Zulrah for the Zulrah's scales.

After the completion of the Dwarf Cannon quest, players can use dwarf multicannons to train. The price of the cannon, and the time required to smith cannonballs for it make this training method hard to justify for most ironmen.

However, it can be decent in some situations since its damage output is high compared to a low ranged level. It would take roughly 35k cannonballs to get from 40-70 ranged.

The Nightmare Zone can be a good source of idle ranged experience starting at level 55.