Runecraft is mostly trained as normal, especially if training Runecraft through non-essence methods. However, essence-based training methods can be troublesome for ironmen due to lack of buying essence from the Grand Exchange and instead, ironmen would have to obtain large quantities of pure essences in bulk from other activities. Fortunately, ironmen can effectively reach

These are fast and recommendable methods to train Runecraft that don't require a supply of rune essence, pure essence, or daeyalt essence.

Rune Mysteries is required for unlocking the Runecraft skill, however it rewards no experience. Enter the Abyss is available immediately afterwards, and rewards 1,000 experience, enough for level

9 . This miniquest does require briefly entering low-level Wilderness, so

hardcore ironmen should beware. At

10 Runecraft, Temple of the Eye quest is available which, which will grant a total of 9,210 experience during and after the quest, which is enough to reach the

27 Runecraft level requirement to do the Guardians of the Rift minigame.

The Guardians of the Rift minigame is a fairly efficient and much more engaging way of training Runecraft. In addition to Runecraft experience, the minigame also offers passive Mining and Crafting experience. The minigame is profitable and offers useful rewards, such as the colossal pouch for holding more essence and Raiments of the Eye set for crafting extra runes.

To participate in the minigame, players must have completed Temple of the Eye and it's fairly quick to get to

10 Runecraft to start the quest by completing Enter the Abyss and gaining few extra Runecraft experience from another quest or crafting runes.

There are also a number of quests that are very useful to have completed:

For the fastest experience, ironmen should use the best pickaxe and all essence pouches available. The rune pouch is strongly recommended to save inventory space. Players who do not have the Raiments of the Eye outfit yet are advised to wear any tier of the Varrock armour to have a 10% chance to mine double guardian fragments at once. Ironmen may also make use of the celestial ring if they have it.

Ironmen who have the abyssal lantern should light it with redwood logs when possible, which can either be obtained by chopping redwood trees at

90 Woodcutting (boostable) or opening Gold Chests in the Shades of Mort'ton minigame, which high combat level is recommended for as well as

80 Firemaking at minimum to burn fiyr remains on magic pyre logs for gold keys. This makes it so the player does not need to repair essence pouches via NPC Contact, which saves 1–3 inventory slots, depending on if the player is using a rune pouch. Ironmen who cannot use redwood logs or are wearing the Runecraft cape are advised to use yew logs for the contribution point boost it provides or willow/magic logs for extra runes crafted (blisterwood logs for blood runes).

Through Guardians of the Rift players can obtain the Raiments of the Eye set. It provides 10% more runes per piece worn and an additional 20% set bonus, for a total of 60% when wearing a full set, which is very useful for ironmen to obtain. The abyssal needle is used to combine essence pouches into the colossal pouch. It can hold up to 40 essence, making it the best essence pouch to use. Valuable runes obtained through the minigame can be kept for later use or sold for profit.

Experience rates are shown in the table below. The rates assume using all pouches available. From 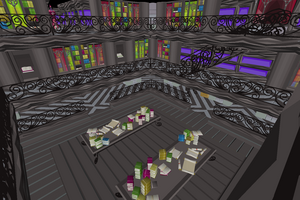 Quest minimalists that only want to train Runecraft without completing Rune Mysteries or other quests can find books for customers in the Arceuus Library. This method offers relatively fast experience and does not require any pure essence. However, since each book turned in grants 4 times the current Runecraft level in experience, it is recommended to gain at least 20 Runecraft levels through conventional methods before utilizing the library unless if the player is a quest minimalist. Energy-restoration food, potions, and explorer's ring are recommended to increase the experience rate while running around the library.

With good performance and when using stamina potions, players can turn in up to around 160 books per hour, translating to

70 Runecraft. This method is viable without stamina potions, but the player can only turn in up to around 100–110 books per hour.

Any unneeded blood and soul runes can be sold to Ali Morrisane for money, but it is strongly recommended to save the blood runes for casting barrage spells for Magic training.

An option for mid and high level players is opening Spoils of war from Soul Wars. Pure essence rewarded here can be 5,000–15,000 depending on luck. Each game lasts 15 minutes, and the 30 zeal needed to buy spoils of war depends on the amount of participation. Low level players (below 60 combat) may need 2 games to obtain over 30 zeal, while higher levels can easily obtain 30–40+ zeal per game.

Temple Trekking with an easy companion on Route 1 provides 50 pure essence per trip. Because all combat instances can be evaded, low level players can avoid combat entirely and focus on completing treks as fast as possible. In combination with Protect from Melee and/or Protect from Missiles, players are extremely unlikely to take damage. This is also a good early source of bow strings and the Lumberjack outfit. See the Temple Trekking page for more info on what enemies/encounters to avoid, how to get the Lumberjack outfit, and how to unlock Burgh de Rott Ramble for even faster trips.

Daeyalt essence is only available after completion of Sins of the Father, in which players fight several extremely high level bosses. Recommended combat stats to effectively complete this quest are 80 and above.

Players can mine daeyalt essence at the mine beneath Darkmeyer, which can be used in place of pure essence and will grant 50% extra Runecraft experience. With tick manipulation, this becomes a good source of essence and experience.

The Abyss can be accessed after the completion of Enter the Abyss, and will grant access to every altar without a talisman or tiara. It can be reached via the Wilderness, or fairy ring code alr.

The abyss typically offers worse experience rates than other methods due to the enemies and obstacles, however it can be valuable for access to remote altars to acquire specific runes the player needs (such as nature runes, law runes, etc.), or when a talisman is not available.

At level 23, players can craft Lava runes. Without access to the Lunar spellbook and 82 Magic for Magic Imbue (requiring Lunar Diplomacy) this method can be difficult to use for Ironmen due to lack of access to elemental talismans in bulk. Elemental talismans can be acquired from Guardians of the Rift but it's preferrable to do Ourania Altar runs instead.

Without spellbook: Fill an inventory with pure essence, a fire tiara, earth runes, and an earth talisman and use a ring of dueling to teleport to the Emir's Arena. A few steps north is the Fire Altar where the runes can be crafted. The ring of dueling can be used to teleport to Castle Wars for easy access to a bank, at which point the process can be repeated.

With spellbook: Equip a steam battlestaff, fill your inventory with essence pouches, a rune pouch filled with earth runes and astral runes, and pure essence. The goal is to cast Magic Imbue so that earth talismans are not necessary.

Players will need to make the emerald jewellery for crafting lava runes; however, high-level players may obtain significant quantities of binding necklaces while killing the Abyssal Sire for its unique drops.

Players can craft random runes at the Ourania Altar starting at

1 Runecraft, but getting there is slow and inefficient without completion of Lunar Diplomacy for Ourania Teleport (requiring

71 Magic). Completion of the medium Ardougne Diary is also highly recommended for bonus runes. Players may take a slow, winding path or faster path filled with low to mid level enemies. Players will not be hit often on official Ourania worlds, but low levels should be cautious. Once the above requirements are met:

95 Runecraft and after completing Dragon Slayer II, players can craft wrath runes. They are mainly used for casting offering spells to train Prayer. Wrath runes are dropped by monsters in relatively small quantities, so generally the best way to get them is to craft them.

To access the Wrath Altar, players will need to wear the Runecraft cape, get a wrath talisman dropped by Vorkath, adamant, rune dragons. Players can also use a catalytic talisman or tiara, or an attuned Hat of the eye. Players will also need a lot of noted pure essence, which can be obtained through training Slayer. For the fastest rates, players will also need to get all the essence pouches for carrying more pure essence per lap. Having the ornate rejuvenation pool in the player-owned house is also recommended for restoring Hitpoints and run energy.

This method is potentially dangerous, as players will need to run past high-level dragons. It is strongly recommended not to store items at an Item Retrieval Service, as it is very possible to die to an untimely disconnection.

Experience rates can vary depending on the inventory setup and the available teleport to unnote essence. Players can gain up to around

27,000 experience per hour when wearing the Runecraft cape and using the Crafting cape to unnote essence at the Crafting Guild bank chest.