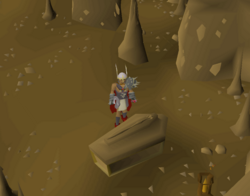 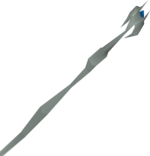 Ivandis Seergaze was one of the seven priestly warriors who fought against Lord Drakan and his forces.

They all died and were buried at Paterdomus, but rumours say that Ivandis was buried in a secret cave somewhere in Morytania. It is then found to be in an offshoot of the Myreque Hideout by removing the planks boarding up the entrance. His weapon was the rod of ivandis, made of a silver and mithril alloy and a sapphire. The rod is imbued with magic and blessed by the holiness of the River Salve. Ivandis battled Drakan's creatures with his staff, and after trapping them with his staff, he would then use a Serum of Guthix.

He is described in the Ancient Tome as: