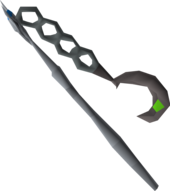 The Ivandis flail is a one-handed melee weapon created by the player during A Taste of Hope from a chain, an enchanted emerald sickle (b) and the rod of Ivandis. The flail requires an Attack level of 40 to wield, and gives a 20% damage bonus against vampyres. It can also autocast spells.

This flail is effective in damaging and killing the vyrewatch because, despite their sufficient mind-reading ability to predict attacks and avoid damage, the flail is incredibly unpredictable and random. The sickle head further increases the unpredictability of the weapon. Thus, attackers do not hit the Vyrewatch in the intended way, rendering their mind-reading useless.

The flail retains the ability to cast Bloom from the silver sickle (b). This versatility lets a player kill ghasts, vampyre juvinates and vyrewatch with a single weapon.

While players can make a flail themselves after the quest, it is much easier to purchase one from Vertida Sefalatis for 20,000 coins in the old Myreque Hideout under Old Man Ral's home. During Sins of the Father, an Ivandis flail is used to create a Blisterwood flail in the hideout.

The Ivandis flail has a special attack, Retainer, which traps a vampyre juvenile or juvinate that has less than 50% hitpoints remaining, preventing it from retaliating. This consumes 10% of the player's special attack energy.

The ivandis flail is the item Falo requires players to show him when he sings about: Vampyres are agile opponents, damaged best with a weapon of many components.