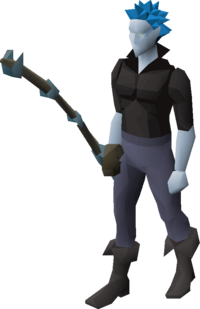 Jack Frost is the son of Santa, and has made a few appearances in various Christmas events.

During the 2017 Christmas event, he can be found fishing with his father in the Corsair Cove while his father is on holiday.

When spoken to, he will exclaim Shhh! You'll scare the fish!

During the 2019 Christmas event, Santa passes on the responsibility of overseeing of Gingerbread Gnome production in Varrock to his son. When he showed up and took control of the bakery, the bakers attempted to stop him, resulting in two of them being locked up and production coming to a stand still.

The player is sent by Santa to deal with him, but due to the gravity of the situation, he decides to ask Anti-Santa, his nemesis currently imprisoned in ScapeRune, to deal with Jack, as he is terrified of him.

Once the player brings Anti-Santa to the bakery, Jack Frost will attempt to fight Anti-Santa, to no avail. He will then cry for his mother and teleport out, with Anti-Santa following suit.