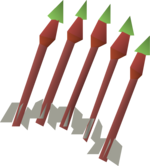 Jade dragon bolts (e) are jade dragon bolts that are enchanted via the Enchant Crossbow Bolt (Jade) spell by a player with level 14 Magic. The spell enchants 10 bolts per cast, and uses 1 cosmic and 2 earth runes.

Enchanted jade dragon bolts have a chance of triggering the Earth's Fury effect, which results in the bolts knocking their target to the ground for approximately six seconds, although agile opponents may resist this.

One could conceivably use the Jade dragon bolts (e) special ability for tactical purposes in Castle Wars as a stuns to limit the flag carrier's mobility, serving as a ranged alternative to Ice Barrage or the Dragon spear. However, flag carriers with high Agility will be very resistant to this.

Unlike other enchanted bolts, jade dragon bolts actually roll twice when used against players in order to activate: the rate of the special effect occurring, then rolling against the target's Agility level. As such, the chance of it activating overall may be significantly lower than other enchanted bolts.

If the player has completed the Hard Kandarin Diary, there is a 10% increase of the likelihood that the special effect of an enchanted bolt will occur, resulting in a first roll chance of 6.6%. This effect is always active regardless if the headgear is equipped.