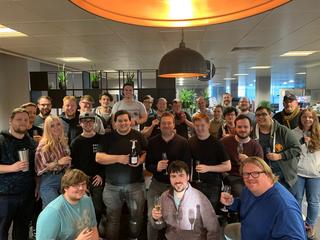 Jagex Moderators, also known as Staff Moderators, Jagex Mods, JMods, or admins, are employees working for Jagex Ltd. Jagex Moderator accounts are only used for work purposes such as play-testing, debugging, and dealing with in-game situations.

Jagex Moderators also have access to certain tools to aid in community events or quality assurance that players do not have access to, such as the rotten potato, egg, cabbage, carrot, and strawberry. For security, employees can only login to a Jagex Moderator account while connected to a designated server. A selection of Moderators often appear on the weekly Old School RuneScape live stream where they discuss recent events, answer player-submitted questions, and show off upcoming updates.

Jagex Moderator accounts will always have a gold crown (

) beside their name when talking in public and private game chat and a gold background when posting on the forums. Jagex Moderator usernames will always begin with "Mod" with the exception of Paul, Ian, and Andrew, the creators of RuneScape. Additionally, Jagex has also made it so that players' names cannot begin or have the word 'Mod' in their name to prevent confusion and potential scamming among players (i.e. Rule 5, which is Jagex staff impersonation).

The Leadership team is responsible for providing guidance, direction, and coordination to the other teams and Old School RuneScape as a whole.

The Wardens are responsible for creating larger pieces of content aimed to retain and entertain existing players, as well as attract new players.

The team is currently led by Mod Ed.

The Unknown are responsible for refining the game's client features.

The team is currently led by Mod Lenny.

The Operators are responsible for delivering quality-of-life updates and responding to what the players want to see; these updates are the ones players will typically see in polls and weekly game updates.

The team is currently led by Mod Maylea.

The Juggernauts are responsible for delivering large group-based game features.

The team is currently led by Mod Ash.

The graphics team provide all visual assets for the game, and are also members of other development teams depending on project commitments.

The team is managed by Mod Deagle, the Associate Art Director.

The team is led by Mod Vegard, the Lead Game Engine Developer.

The publishing team are responsible for communicating with the players and act as the conduit for the game's releases, working closely with the development teams based on project commitments.