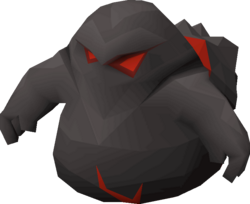 Its magic and ranged attacks can each hit in the high 20s. Jal-Ak attacks every 6 ticks, and 3 ticks before each attack Jal-Ak will detect what protection prayer the player is using and will change its attack style depending on whether the player is using Protect from Magic or Protect from Missiles. If the player is not using any protection prayer, Jal-Ak's attack will be of a random style. However, there is a delay in the attack animation, so switching to other protection prayer before the projectile is launched will block the damage. This delay is particularly useful when the player must leave a safespot, leaving the player vulnerable to attack from both Jal-Ak and another monster; Jal-Ak will be off-tick from the other monster, such that the two monsters will not launch their attacks on the same tick.

When Jal-Ak dies, it splits into 3 smaller versions of itself, each using a different style of the combat triangle: Jal-AkRek-Xil (Ranged), Jal-AkRek-Mej (Mage), and Jal-AkRek-Ket (Melee).

Translations of some words and phrases in the TzHaar language were revealed in RuneScape 3 via the TzHaar Tourist Guide book. According to this text, Jal means foreign, or not TzHaar, and Ak means forked or twin.