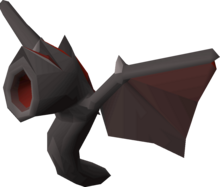 Jal-MejRah is a monster that is encountered in the Inferno. It is apparently the ancestor of the Tz-Kih.

Jal-MejRahs function similar to a Tz-Kih, except rather than draining prayer points with their attack, they drain their run energy instead. They drain 3 run energy per hit.

Jal-MejRah also has the ability to slightly drain a player's combat stats, boosting its own by the same amount.

Jal-MejRah have a very short attack range compared to other Inferno creatures, only about 4 squares.