Jal-Zek are the Inferno's variant of the Fight Cave's Ket-Zek. They attack with powerful Magic and Melee attacks, and are the third strongest monster in the Inferno. 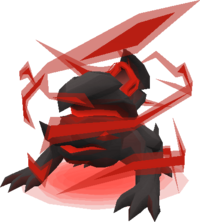 A Jal-Zek's appearance when regenerating enemies.

Jal-Zeks have a unique ability where they can revive a defeated monster in the same round they appear in. Each monster can only be revived once and with half health. Even so, it's usually better to kill the lower-levelled monsters first, as they can still hit hard and have much lower hitpoints than Jal-Zek. The revived monsters respawn near the centre-east of the arena, which is often a more favourable position. Jal-Zek will only use its respawn mechanic while in combat. Jal-Nibs cannot be revived, nor can the miniature Jal-Ak spawns.

Jal-Zek will not attack at the same time that it is reviving another monster, and the monsters that are revived will have a slight delay before attacking the player. Jal-Zek's attacks are fairly predictable after revival: it will resume attacking 8 ticks after it uses its special ability, on what would have been its second attack. This means that players who are prayer flicking between multiple attack styles do not need to change their rhythm when this happens.

Be aware that Jal-Zeks can also attack with melee diagonally when you are standing one tile diagonal of them.