From Old School RuneScape Wiki
Jump to navigation Jump to search
The RuneScape Wiki also has an article on: rsw:Little Zuk
Jal-Nib-RekTzRek-Zuk? (edit) 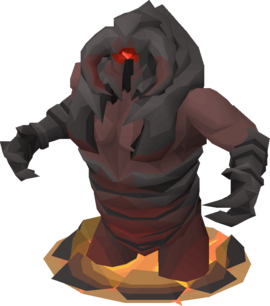 The Jal-nib-rek (roughly translated as Foreign Nibbler Baby/Young) is a Jal-Nib dropped by TzKal-Zuk upon completion of the Inferno. The standard drop rate is 1/100, but this is increased to 1/75 if TzKal-Zuk is defeated while on a Slayer task. Players may also exchange their infernal capes by speaking to TzHaar-Ket-Keh for a 1/100 chance of obtaining the pet.

Players can right click "Metamorphosis" to change between the Jal-Nib and TzRek-Zuk, which is a smaller version of TzKal-Zuk.