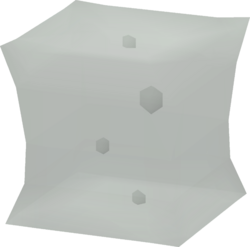 Jellies are Slayer monsters found in the Fremennik Slayer Dungeon that require a Slayer level of 52 to kill. They give 75 Slayer experience per kill and drop hard clue scrolls and steel weaponry.

These monsters attack with a magic-based melee attack; therefore high magic defence armour, such as dragonhide is effective against their attacks. However, Protect from Melee will prevent all damage from them. Players may Pray Flick if the cost of prayer potions seems too high.

They can be safespotted by using either side of the rockfall in the northern part of the cave, which the Jellies will not wander away from. It is also possible to safespot them by standing on the corner of the rocks in the western section of the chamber or from behind the stones in the hallway south of the Jelly chamber.

Drop rates estimated based on 237,836 kills from the Drop Rate Project, unless otherwise cited.

The overall chance of rolling a coin drop is 88/128 with an average value of 96.

There is approximately a 59/100 chance of rolling the Wilderness Slayer Cave drop table, which includes various items available from Justine's stuff for the Last Shopper Standing.