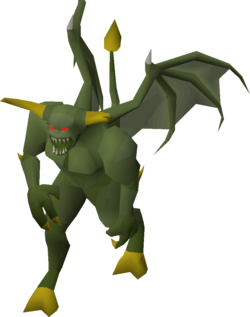 The Jungle demon is a quest monster fought during the Monkey Madness I quest. It is among the strongest demons in the game. It uses extremely strong magic attacks and, when in range, a halberd-like melee attack. It is possible to let the gnomes around it take it to about 10 hitpoints, while you are hiding across the bridge at the edge of the arena. Afterwards, you can run out to quickly finish it off. However, if the gnomes "kill" the demon, it will restore 20% of its hitpoints, so you cannot fully rely on the 10th Squad to kill it.

Like all demons, it is susceptible to the effects of demonbane weapons.

The Jungle Demon alternates between all four blast spells for its magic attacks, and its melee attack is like a halberd (which means that it can hit two tiles away). Both types of attacks can hit up to 32 damage.

The recommended equipment to bring when fighting the Jungle Demon would probably be 2-3 four dose prayer potions depending on your Prayer level (37 for Protect from Magic makes the fight considerably easier). Without Protect from Magic, a high magic defence and lots of food may be required. The rest of your inventory should have monkfish or better, as well as magic or ranging equipment, depending on your method of attack.

The easiest way to kill the Jungle Demon is to hide at the edge of the arena, waiting until the gnomes get him down to about 10 hitpoints. Afterwards, you can run out and finish it quickly. The Jungle Demon will regenerate to 20% of its full health if you do not deal the final blow.

For those without 37 Prayer, the above method is highly recommended. Be sure to equip high magic defence gear and farcast it using Ranged or Magic spells. Alternatively, a dragon dagger special attack can be used four times in a row, which is very likely to knock it out as well.

Those with 37 Prayer can simply attack the Jungle Demon from a distance by either using Ranged or Magic spells while using the Protect from Magic prayer.

Using a dwarf multicannon, fewer than twenty (20) cannonballs may be used, making the cannon the most effective way to kill the demon.

Although most demons are very weak to Magic, the Jungle Demon has a high magic level and high magic defence, so using Magic against it is not recommended. If magic is your only option, it's recommended to use Fire bolt. To avoid the demon continually healing when using magic, wait for the gnomes to get the demon to 15-20 hitpoints, then use Protect from Magic and run across the arena to another bridge. The gnomes won't follow, so you don't have to worry about the demon healing while your magic splashes.

Due to the demon attacking with both Magic and melee at close range, it is not recommended to use melee. Doing so would prohibit you from praying against all damage. If melee is however your only option, be sure to use a stab or crush weapon whilst praying protect from Magic, as the Jungle Demon has high slash defence.