Jungle Potion is a short quest taking place on Karamja. It involves gathering a handful of different herbs for Trufitus Shakaya, in order for him to perform a ritual to communicate with the island's gods.

Locations of all materials.

Head to the small village of Tai Bwo Wannai, south of Brimhaven on Karamja. (A charter ship can be used to get to Brimhaven).

Talk to Trufitus, found in a small house north-east of the main village area. Ask him where everyone is, and he says that they've left the village.

Ask him about how you can help, and he tells you that he needs several herbs to mix a potion so that he can commune with the Gods. Tell him that you'll give it a try.

Note: You cannot collect all of the herbs at once. You will need to go back to talk with Trufitus each time.

Head south-west of the village near the ocean and find Marshy Jungle Vine. Search it to get a grimy snake weed (might take 1–5 minutes, with increased speed with higher Herblore). Clean the herb and give it to Trufitus.

Note: If you intend to do Legends' Quest and Zogre Flesh Eaters, take three snake weeds to save yourself time later.

Head north-east of Trufitus' hut until you reach a peninsula with several palm trees on it (just south of an agility shortcut).

Search a palm tree to find a grimy ardrigal. Clean the herb and give it to Trufitus.

Level 46 Harpie Bug Swarms will attack you the entire time you're searching for the herb and can easily kill an unwary lower leveled player.

Note: If you intend to do Legends' Quest, take two ardrigals to save yourself time later, three for long path. 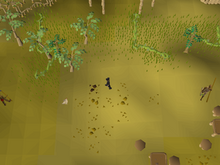 The location of the sito foil.

Go south-west to the middle of the village, and on the western side, and just north of the westernmost table should be a patch of scorched earth. Search it to find the grimy sito foil. Clean the herb and give it to Trufitus. 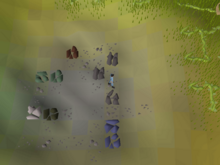 The location of the volencia moss.

Head south-east of the hut until you reach a group of rocks you can search that are in the mining area, search an empty one to find the grimy volencia moss. Clean the herb and give it to Trufitus.

Note: If you intend to do Fairytale I - Growing Pains take an extra Volencia Moss as you may need one for the quest. 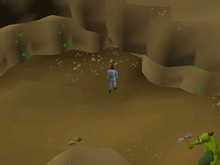 The location of the rogue's purse.

Rogue's purse can be found north of the village. Head north-east towards where you found the Ardrigal. Once you find the end of the cliffs, follow the coastline west until you find a pile of searchable rocks. Search them and enter the cave.

Note: (optional) Bring a spade to about 13-16 tiles north-west of cave entrance (before entering cave) and dig around for the Clue hunter trousers.

Once inside the cave, run south past the level 53 Jogres until you find a Fungus covered Cavern wall. Search it until you find the grimy rogue's purse (may take some minutes). Consider collecting an extra rogue's purse if you plan on completing Zogre Flesh Eaters to save the extra trip.

Note: The Jogres can also drop the grimy rogue's purse, however Trufitus will not accept it. Killing a Jogre in this dungeon is a task for the Karamja Easy Diary.

Warning: Jogres are aggressive, be wary if you have low defence or hitpoints.

Return to Trufitus with the final cleaned herb. 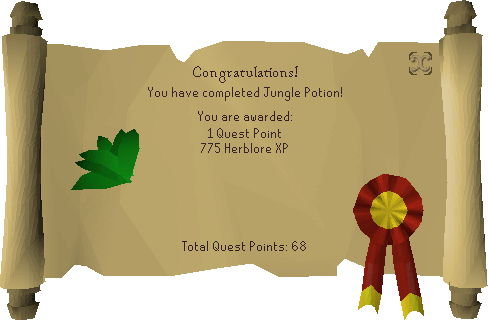 Completion of Jungle Potion is required for the following: