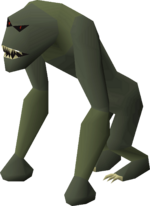 Jungle horrors are monsters that live on the island of Mos Le'Harmless. Players must have completed Cabin Fever to gain access to the island. They can be assigned as a Slayer task by Chaeldar and Vannaka. They are a weaker relative of the cave horrors that live inside the caves on the island. A Witchwood Icon is NOT required to kill Jungle Horrors.

Note: The biggest camp of jungle horrors is directly north from the exit of the camp on Mos Le'Harmless. There are approximately 10-12 jungle horrors here.

Alternatively, players with a high Defence level can sustain themselves by cutting jungle horrors' commonly dropped pineapples. Simply bring a knife to cut it into pineapple slices. This will heal 8 Hitpoints per pineapple.

There is a single spawn near the opening in the northern Mos Le'Harmless wall which will not run away when damaged from behind the wall and can thus be easily safespotted.

Drop rates estimated based on 94,428 kills from the Drop Rate Project, unless otherwise cited.

There is a 6/129 chance of rolling the herb drop table.

There is a 15/129 chance of rolling the allotment seed drop table.

There is a 1/129 chance of rolling the gem drop table.